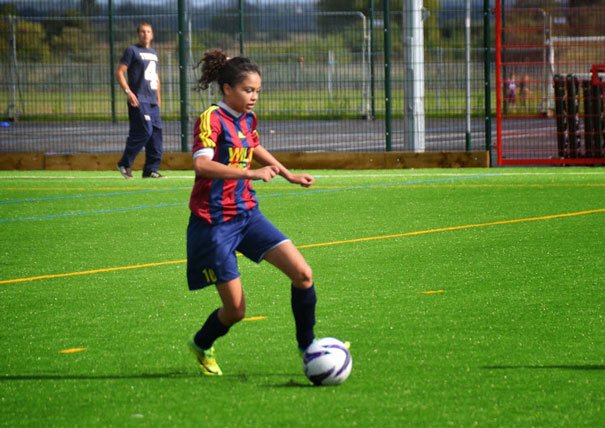 Mill Lane United Yellows and Hessle Town met for the third successive week in a match that could  have a major bearing at the end of the season in the East Riding Girls Football League. The previous two cup encounters had been won by Mill Lane Yellows and Hessle knew a victory was imperative if they had any chance of making ground on the Yellows at the top of the table.  The game started with both teams looking to gain the upper hand and Neave Spriggs nearly gave the Yellows an early lead after a header from a Charlotte Holliday corner just went passed the near post. Mill Lane were dominating possession and a period of sustained pressure was rewarded when in form striker Morgan Nagee followed in a left foot shot from Neave Spriggs which the Hessle keeper could not hold to give the Yellows a one nil leads inside 10 minutes. Mill Lane United Yellows were playing some great passing football using the full pitch and only enthusiastic defending by Hessle kept them out. Playing patiently the Yellows increased their lead with a 25-yard  shot from defender Charlotte Holliday after a run from her own half assisted by Amy Radford.  Credit to Hessle who battled back trying to get back into the game and only a goal-line  clearance from Radford kept them out . The game was end to end , but the Yellows finishing was the difference and captain Emma Johnson confirmed this with a sweet shot from outside  the area to make the half time score three nil to the Mill Lane Yellows.  The second half started with the Yellows determined to put the game to bed and this they did with two goals from Neave Spriggs the first a 30-yard thunder bolt that left the Hessle keeper rooted to the spot to give the Yellows a comfortable five nil lead. Hessle never gave in and were unlucky not to get a goal their efforts deserved after a couple of good efforts from striker Shannon  Welsh.  Weathering the storm the Yellows finished the stronger and scored two more goals a second of the match for Morgan Nagee and the last of the game from substitute Courtney Less after a fierce shot from 12 yards. The final whistle blew a seven nil victory for the Yellows from Mill Lane to consolidate their position at the summit of the Under 16 Girls League. A pleasing performance for Mill Lane with some exceptional finishing as the team gets better and better as they start to rediscover their best form at the business end of the season. Man of the matches went to Courtney McConville for an industrious box to box midfield performance and Jessica Pashby for some committed defending in another clean sheet for the team.