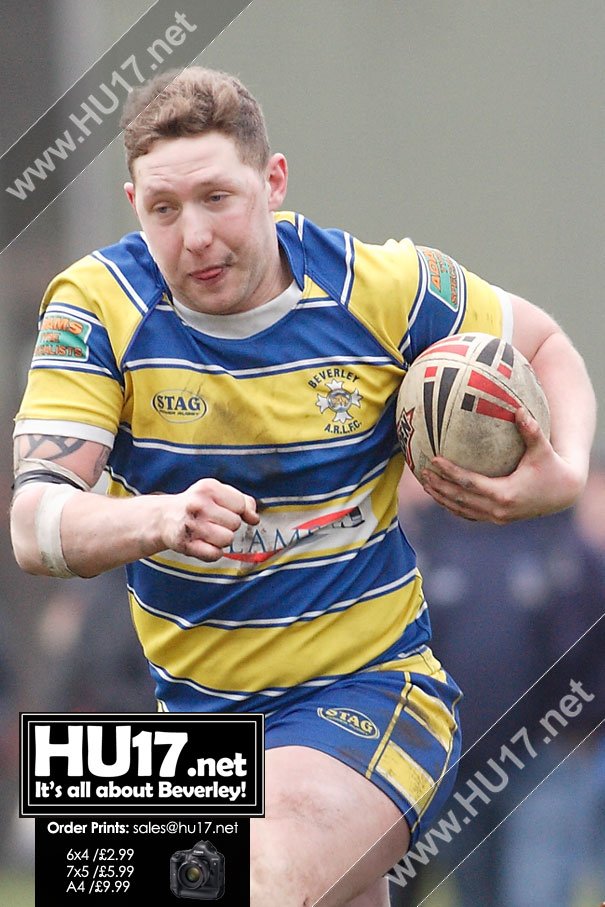 The blue and golds claimed another two league points in a stop-start penalty rid encounter last Saturday at the Beverley Leisure Centre.

Hull Wyke put out a stronger line up than the previous meeting between the two sides and proved to be a stubborn side to break down. Wyke had the better of the opening exchanges with a number of repeat sets on the Beverley line.

However, one such attacking movement saw a long ball intercepted by Glen Anfield. Anfield sprinted almost the entire length of the Leisure Centre pitch to score beneath the posts for Watkin to convert.

Beverley now with their tails up, started to apply the pressure. One such spell of pressure ended with Lewis Poskitt’s well timed pass splitting the Wyke defence to send Jack Howdle under the posts. Watkin again converted.

Beverley attempted to turn the screw and a sharp passing movement to the right saw Jake Hart-Fisher unlucky to have a try ruled out for bouncing the ball.

Exchanges became a little heated towards the end of the half leading to the dismissal of a Wyke player. On the stroke of half-time Ryan Watkin broke up the middle and got the ball away to the supporting Josh Pooley.

The ball then went through Lee Falcus and Glen Anfield’s hands in spectacular fashion and ended up with Ben Calvert scoring in the corner despite the best efforts of several chasing defenders. The conversion was missed for a 16-0 interval lead.

The early moments of the second half saw the visitors again camp out inside the Beverley 20 meter area, but some resolute defence kept them out. In one of their few raids into Wyke territory, Ben Calvert was pulled up short after a determined run then penalty was awarded for interference.

A quick tap saw Jack Howdle go over for his second with the extras added. More pressure was to follow on the Beverley ARLC line but a good counter break by Watkin out of his own 20 saw him go almost all of the way. A quick play the ball saw Mike Cooper spot the gap on the blind side and send Ben Calvert over for his second.

The extras were added. The pressure and repeat sets on the Beverley line aided by a stream of penalties did not go away, and the visitors finally got over the line with a converted try.

Beverley responded with a good break from deep inside his own half from Guy Adams. Adams was finally brought to ground but Gen Anfield took the ball at speed to round the defence and score behind the posts. Watkin added his fifth goal of the afternoon.

Wyke added a late consolation try. Man of the match was Mike Cooper, who gave a very composed performance directing the team around the park from dummy half. At the time of going to print Beverley has no game this week.

Beverley ARLC would like to announce one of the worst kept secrets. They will be joining the RFL administered Yorkshire Mens League after they have fulfilled their remaining five Hull & District League fixtures.

Ahead of its start on April 11th, they have been placed in Division One along side the following teams: Mirfield, Hull Wyke, Oulton, Birstall Victoria, Sidall, York Acorn, Bentley Good Companions, Hillsborough Hawks and Milford.

Reasons for change are that the club were looking to play in a higher-profile league where they will receive a full seasons fixtures rather than going on a week to week basis.

Furthermore, should they win promotion to the Hull & District Premier division this season, there would be nowhere else to go after.

The Hull & District and Pennine Leagues are the only leagues in the country to still operate in Winter whereas the Yorkshire League sits within the main structure of the game. Thus ambitious clubs can ultimately progress to the National Conference League.