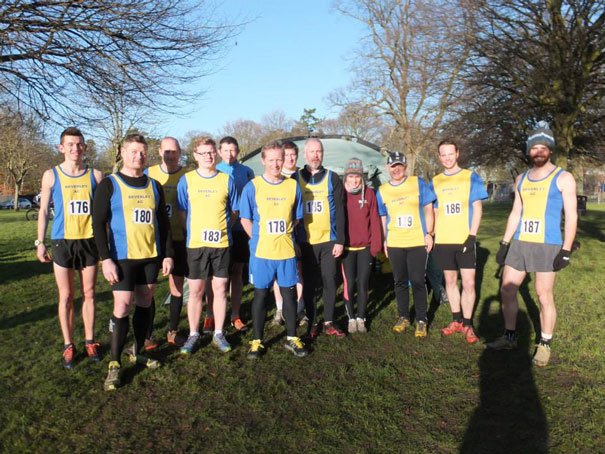 Beverley AC sent a team of 10 men and 1 woman plus a large number of juniors, joined the field at the Humberside County Championships at Weelsby Woods, Grimsby, last Sunday.

Conditions were fairly heavy underfoot in places but the crisp, sunny weather provided good general conditions for running and the park and forested areas of the venue a pleasant backdrop to the event.

10 Beverley men joined a field of 83 in the Men’s Senior 9300m. Stuart Little unfortunately could not count to the Beverley team as his ‘First Claim’ club is ‘out of county’ in Sheffield R.C. which was unfortunate as he finished in a very creditable 14th place in 32:46.

First Beverley runner home in 3rd place overall, was Timmy Davis in 30:07. He was pipped to 1st in a tightly fought race, by Gregan Clarkson of Kingston upon Hull AC in 29:38 and Mike Hargreaves of East Hull Harriers in 30:06. Lee Phipps did well in this strong field, gaining 17th place in 33:12, as did Phillip Savage in 34:54.

One Beverley Runner ran in the Women’s Senior 7200m, though again she could not count as Beverley, as her first claim club is Bristol & West AC; relatively new to the club, Ellen Harrison competed strongly throughout, coming 4th overall in 28:47, the race being won by Rachel Robinson of Aldershot Farnham & District AC in 27:13.

The biggest success of the day went to Becky Briggs, who won the Under 15 girls 4100m in 16:39 and with Laura Duncan 18:20 and Morgan Dennis 19:12, the team prize also went to Beverley. Kezia Barnard and Jordan Peacock also competed well.