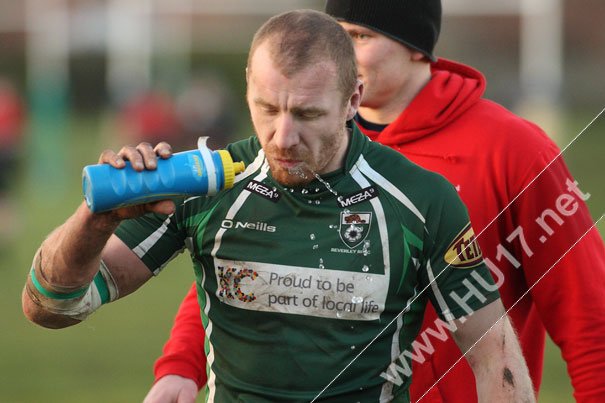 Plenty of spirit but not much memorable rugby. After recent rain and overnight frost the going was pretty heavy and this was never going to be a classic. Neither of these sides is having a great season and for Beverley this was a game they badly needed to win if they are to escape relegation. In the end a draw would probably have been a fair result but Beverley carelessly conceded a late penalty which cost them the game.

Beverley in recent weeks have been steadily getting it together and playing with increasing confidence but today was something of a backward step. Despite being again heavily outmuscled the pack generally held their own. Sadly the lineout this week was a different matter. In the last month they have hardly lost a single ball on their own throw but today it was all very messy and numerous good positions were lost through a combination of poor understanding or indifferent throwing.

Behind the scrum the commanding influence of Junior Tupai was badly missed. Sam Atiola and Ian Morrison both ran strongly in the Beverley centre but too often it was up blind alleys and it was not until the last minute that wing Mark Harling on the right wing actually received a pass. It was a pity because several times in the match he would have been in a potentially try scoring position had the ball been released to him.

In truth there was not a great deal of attacking fluency on either side. It took twenty minutes for the first side to register a score and that was from a penalty slotted by Lymm wing Cormack Nolan when Beverley were penalised on their own line. Neither side could find much penetration but five minutes before halftime Beverley struck back with a fine try. They moved the ball quickly right from a scrum and Morrison burst through the middle with a bristling run to score from halfway. Phil Duboulay converted and it looked like Beverley would turn round 7-3 up.

But direct from the restart Lymm attacked down Beverley’s left and Nolan swept aside some lamentable tackling to send full back Joe Knowles over for a converted try. After that it was all catch-up rugby for Beverley.

Early in the second half Duboulay slotted a penalty from forty metres to draw Beverley level but Lymm quickly edged ahead again when Nolan again found himself scorching passed some non existent tackling for a fine converted try. Nolan was perhaps the game’s outstanding player, showing a lively turn of speed and making the most of Beverley’s fragility down their left flank.

The start had been delayed due to Lymm’s enforced late arrival which meant that the last quarter was played out in a rapidly descending raw gloom. Beverley were showing plenty of spirit in an attempt to get the win they badly needed and they got back on terms with a fine solo try by Duboulay. The ball was transferred left from a scrum ten metres out on the right and Duboulay sold a lovely dummy in midfield before slicing through to the posts. His conversion levelled the scores at 17-17.

Both sides had chances to snatch victory but there were few occasions when either line was seriously threatened. With time running out it looked odds on that the game would drift to a draw. Sadly for Beverley seven minutes from time they threw it away with some ill disciplined handling in a scrum forty metres out and Nolan made no mistake with the penalty.

Notwithstanding that they had played with plenty of endeavour this last game of the year was rather a disappointing day for Beverley after some hugely encouraging performances in recent weeks. It was a game they might have expected to win and they will now hope that with the return from injury of the likes of Tupai, Stuart Nel, Anthony Maka, and Craig Hancock the new year will bring better fortune.