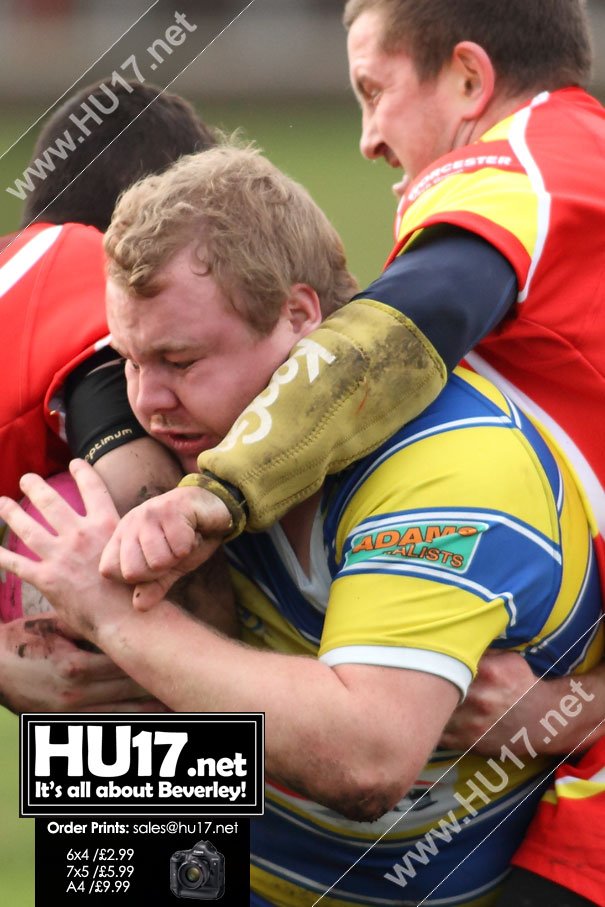 Beverley ARLC returned to the top of the table with this comprehensive thrashing of Fenners. After last week’s last minute defeat by Myton, a response and a confidence booster was required, and that is indeed what happened.

The Blue & Golds  played some enterprising rugby fully utilising the very wide Fenners pitch. Lewis Poskitt and Lee Falcus were unavailable due to work commitments, and Louis Hubbard was injured forcing a re-shuffle. Steve Connolly started at full back, Will Mail at second row, and Billy Riby got his chance at scrum half.

It took until the 5th minute until the opening score which signaled an avalanche. Mail burst through to send the supporting Ben Calvert over. Jake Hart-Fisher’s bustling run then set up the position for quick play the ball and Glen Anfield then sent Ryan Watkin over. Swift handling to the left then sent Adam Robson sprinting away to outpace the cover defence from deep inside his own half.

A break direct from a scrum from Ben Cavert then saw the supporting Glen Anfield go over. Steve Davidson got on the end of an offload to score before Jake Hart-Fisher then broke from his own half with one of those typically mazy runs to score. A quick tap, as the home side started to concede penalties for foul play as their frustration showed, saw Steve Davidson charge over for his second. The score was 42-0 before everyone had had chance to draw breath.

Fenners managed to stem the flow of points in the last ten minutes of the half. They managed to get some repeat sets in the Beverley 20 meter zone and ask some questions of the visitor’s defence. There were no further scores until half time.

The scoreboard was soon ticking along in the second half. Youngster Billy Riby took his chance well in the number seven shirt well with some good ball distribution. Early in the second half his defence splitting pass sent Will Mail over wide out. Quick hand from a scrum then saw Steve Connolly coolly draw his man to send Jake Hart-Fisher over in the corner.

Adam Robson added his second try, before a spectacular handling movement which saw the ball moved from the right flank to the left, saw Jake Hart score his hat-trick in the corner.

Mike Cooper was a lively and efficient performer in the number nine shirt and he added a try for good measure from the dummy half position. The rout was completed when some good approach work saw Adam Robson pulled up short. Steve Davidson took the ball up got an offload in to send the supporting Gavin Molloy crashing over beneath the posts.

Man of the match was Jake Hart-Fisher whose hat-trick and several bustling runs was enough to get him the vote.

This Saturday Beverley are away to North Hull Knights ‘A’ in what will be the final game of 2014. Kick-off is 2pm at Shaw Park.