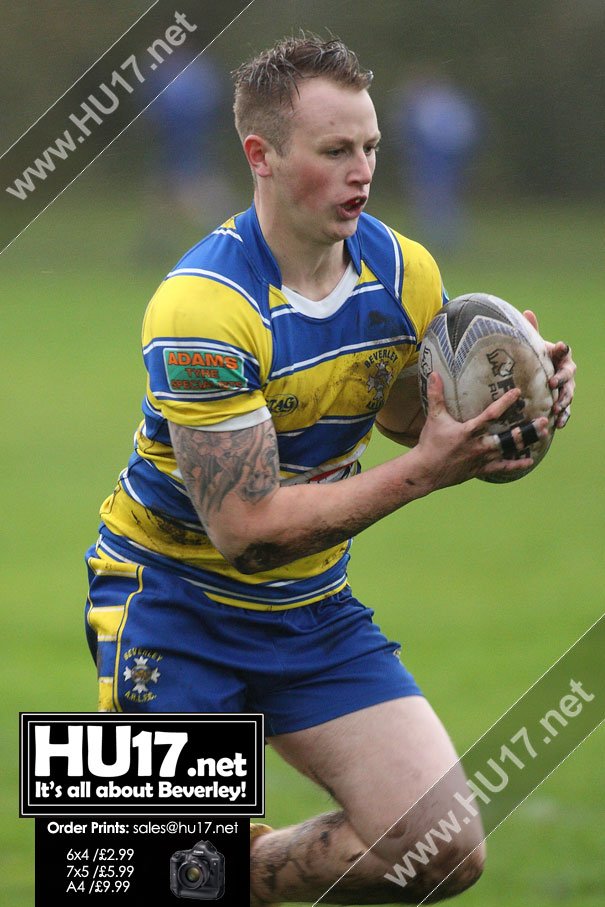 Beverley ARLC progressed to the semi-finals of the Tom Beautiman Cup last Saturday in rain-soaked conditions at the Beverley Leisure Centre.

They have been drawn at home to Three Tuns in what will be a big attraction at the Leisure Centre at a date yet to be confirmed.

Conditions were always going to be a major factor in this cup-tie, which saw the hosts with some notable players missing.

Free-scoring Glen Anfield, centre Craig Morfitt and Ryan Watkin who has still recovered not from his injury were all unavailable. However, it presented opportunities to players who have been missing out in recent weeks. Billy Riby was moved into stand-off half, and Joe Wileman was given a start at prop-forward.

Cottingham kicked off, immediately forcing a handling error from Beverley. The resultant set of six saw them go over for a try to take a shock early lead with an unconverted try. The hosts gradually forced their way into the game and a spell of sustained pressure in the Cottingham 20 meter zone saw Louis Hubbard force his way over wide out in typical style.

More of the game was now been played in the Cottingham half, and a very rare scrum win against the feed the saw a set of six end with Jack Howdle’s offload finding Adam Robson, who finished in the corner. The conversion went wide but Beverley were now reveling in the wet conditions after getting over their early handling problems. Adam Robson was unlucky to lose the ball in the act of scoring, but Louis Hubbard made no mistake with a try that was improved on the stroke of half-time Beverley led 22-4 at the break.

The home side came out for the second half eager to finish the job off. Early defensive pressure by Beverley saw the Tigers lose possession close to their own line.

Hubbard pounced for his hat-trick. Some impressive handling in the wet by the home side then saw the ball shipped to the left for Daryl Gregory to score in he corner. Another touchline conversion followed.

Cottingham pulled back a try shortly after, but it was to be brief respite. Jack Howdle looked do dominant in the pack and a determined break saw him send Louis Hubbaard over for his fourth try before another break by Howdle sent Steve Davidson over.

Howdle converted both scores. The game was held up for what later proved thankfully to be not such a serious injury to a Cottingham player as was first though judging by the level of pain he appeared to be in.

When play resumed man of the match, Adam Robson scored to round off a strong performance by himself. Robson supported well in attack and was rock solid in defence snuffing out any threats that a plucky Cottingham outfit could muster.

All in all, it was a pleasing performance which saw some players that have been on the fringes of selection this season get some game time, which should maintain healthy competition for places.

Beverley return to league action this Saturday where they are away to Lambwath Lions. Kick-off is 2pm at the Eastmount Recreation Centre,Longhill.