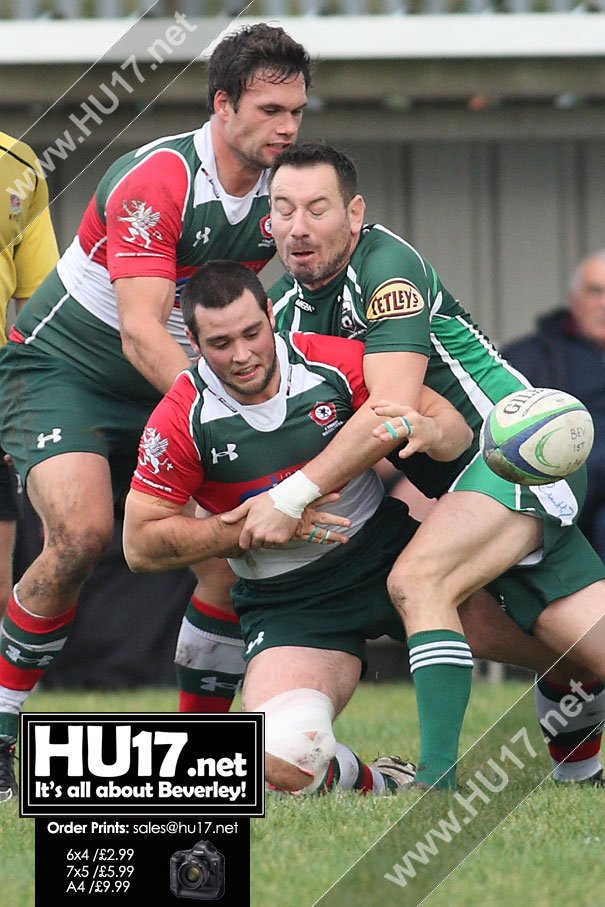 Another defeat but by no means the disaster that Beverley might have been anticipating against the new league leaders.

Waterloo got the comfortable victory they probably expected, but Beverley had their moments here including a remarkable fight-back in the second half.

At one stage they had come back from 3-31 to 29-31 and were well on top. Sadly their hopes of snatching an unlikely win were then dashed by two Waterloo tries in the space of two minutes. None the less against opposition of this quality this was a good effort especially to end up with a four try bonus point.

Beverley briefly led from an early Phil Duboulay penalty but it was soon clear that they were in for a long afternoon. The Waterloo backs were lightning quick and moved the ball swiftly and cleanly. The Beverley back three simply had no answer. Within four minutes lock Rob Bramhall had touched down for a try which full back James O’Brien converted and two more tries by Carl Nolan and James Masters quickly put Waterloo into a 17-3 lead.

With the inspiring presence of David Worrall at number 8 the Beverley forwards were once again holding their own although they found it hard going in the set scrums after the loss of Alex Ogilvie. They made some impressive drives and once again a Beverley score looked most likely to come from the pack. It seemed at one stage that a series of pick and drives must bring a try but the chance was lost when a penalty was conceded virtually on the line.

With wing Anthony Spence in the sin-bin for not rolling away in a maul Masters cruised over in the corner for a converted try to give Waterloo a 24-3 interval lead. Given the one-sided nature of the first half it might have been a lot worse.

Two minutes into the second half centre John Cunningham stretched the lead with a converted try after Beverley had been pushed off the ball on their own put-in. Then it all dramatically changed. Suddenly out of nowhere Beverley started to get into the game. Worrall picked up from a scrum five metres out and powered his way over and then did it again five minutes later. Duboulay’s first conversion attempt rebounded from the posts but his second sailed serenely over.

More was soon to follow. Waterloo were surprisingly starting to look disjointed and error-prone and were further hampered by scrum half James Smith being yellow carded for obstruction. In spite of their limited possession the Beverley midfield were now looking as dangerous as we have seen all season and Richard Bussey with a lovely cut back in the centre crossed for a try under the posts which Duboulay converted. Bussey had a fine game all round and looked to be back at his best after a rather subdued start to the season.

Junior Tupai with an interception on his own 22 raced fifty metres down the right before moving the ball left where a catalogue of dodgy passes somehow still ended with Ben Watson touching down in the opposite corner. Duboulay converted and suddenly Beverley were only two points adrift at 29-31. They were within one score of taking the lead and now surprisingly even had a whiff of victory.

But Waterloo recaptured their earlier spark and Beverley hopes were extinguished by two tries in the space of two minutes. Number 8 Jack Weare picked up and went over from a five metre scrum and direct from the restart wing Matt Crow weaved his way over to settle it.

As soon as Crow had the ball in his hands sixty metres out and faced only the Beverley wing and full back you somehow knew the killer try was coming.

Beverley were unable to respond again and at the death flanker Dan King touched down for an eighth Waterloo try. So another defeat for Beverley but happily there was plenty of encouragement to take from this enjoyable encounter.