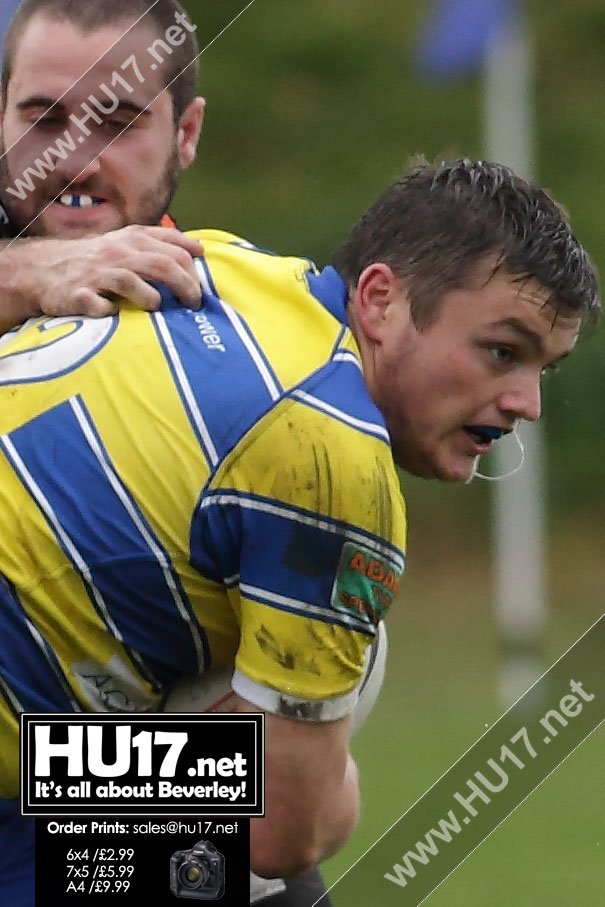 The blue and golds progressed to the next round of this cup competition despite producing possibly their worst performance of the season.

An enthusiastic and youthful Myton outfit took the visitors all the way in this encounter. The home sides kicking game and running in broken play by their full back and wingers when returning kicks, caused Beverley problems all afternoon.

Yet again Coach Pat Howdle shuffled his side around in order to keep as many of his squad members motivated as possible. Gavin Molloy was drafted in at prop whilst Craig Morfitt started on the bench. Steve Davidson and Will Mail who missed out last time also started on the bench. Guy Adams who has returned to the club in a playing capacity was another to start on the bench.

Myton were the livelier of the two sides in the opening exchanges and took the lead in the 8th minute with a converted try. The visitors struggled to make inroads in the early stages and but in the 15th minute they did reply. The home side fumbled possession in their own 20 meter zone giving Beverley a set of six in the danger zone.

Beverley made Myton pay when the ball was shipped out to the left flank for Ben Calvert to score too wide out for Watkin to improve. The blue and golds began to grow, and Glen Anfield decided to take on the opposition about 30 meters out. He managed to evade a number of attempted tackles to score beneath the posts. Watkin this time converted.

The home side continued to looked menacing and replied with an unconverted try to level things up at 10-10. Beverley did have the opportunity to regain the lead when Jack Howdle’s long break perhaps should have produced a try with more support. Both sides went into the interval level.

Ten minutes into the second half Beverley did regain the lead with a well worked try. Quick hands saw the ball moved to the right for Ryan Watkin to give the final pass that sent Craig Morfitt over in the corner.

The remainder of the game saw the home side continue to look dangerous, and it took some sterling defensive efforts to keep them out. Louis Poskitt and Guy Adams got through a terrific amount of work in defence. At the same time, Beverley tended to panic a little at times seemingly desperate to kill the game off.

Myton set up a tense finish in the 65th minute with an unconverted try which came off a kick on the 4th tackle. With just two points separating the sides it was nervous times.

Finally, the nerves were steadied in the dying minutes. A break and offload from man of the match Jack Howdle slipped the ball to Ben Calvert. Calvert was pulled up just short, but the field position was set up.

A few plays later, the ball was moved out for Josh Poole to score in the left-hand corner. The conversion was missed so the hosts could have still snatched a draw at 20-14 especially when the re-start kick went dead. However, there was not enough time left and the whistle blew.

“All credit to us for digging in and proving that we can win despite playing poorly.”

This Saturday Beverley will return to league action away to Hull Wyke ‘A’. Kick off is 2pm at Bricknall Playing Fields, Cropton Road.