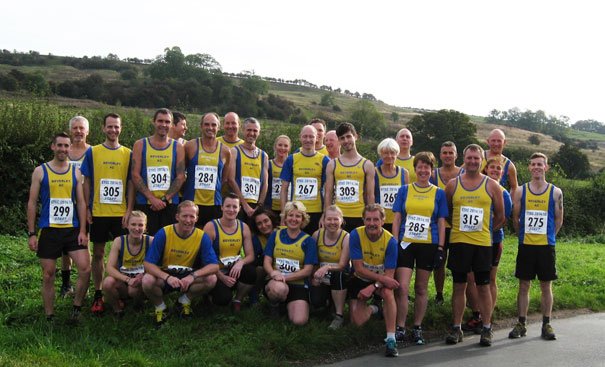 The race covers a demanding and hilly six miles, heading steeply upwards on to the Wolds from the village, and ending with a steep and fast descent to the finish line. In excellent autumnal conditions for cross country running, Beverley AC was very well represented with 32 runners overall, in a field of 138 athletes representing 8 clubs from Hull and East Yorkshire.

Stansfield was third finisher for Beverley and 11th overall in the race, completing the course in 40:59. Her team mate Ellen Harrison was second woman across the line, in 44:01. Their third team member was Tanwen Gray, recording 57:33.

In the men’s race, new member Lee Phipps was Beverley’s first runner, finishing in an excellent third place overall in 38:50.

This is his first time running in the league and he will clearly add some strength to the team in the series of 6 races. Lewis Holloway also took a top ten place, recording 39:44 to finish 8th. He was followed by Darren Rodmell in 41:13, with Phil Savage, Jim McGivern and Darren Edge completing the 6 man team in 42:10; 42:54 and 43:07 respectively. The race was won by Danny Derose (Goole VS), who took 37:55 to complete the challenging route. City of Hull AC’s men and women are currently in the lead in the team events.

The next race in the series is run by Beverley AC, and takes place on Sunday 9th November at Drewton Woods.