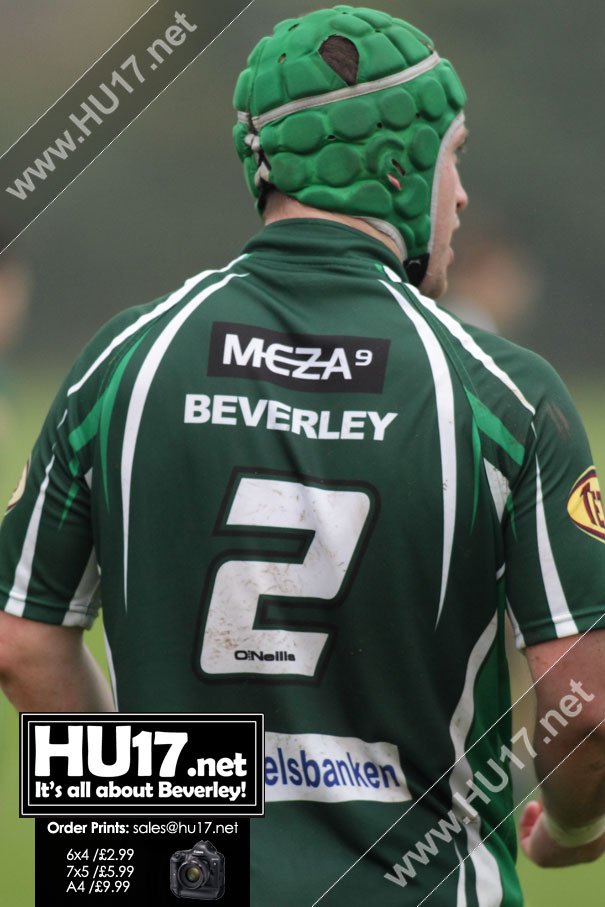 Although the score line reads as a horror show for Beverley RUFC, it must be said it wasn’t all that it may seem. Sheffield were outstanding in the first half in every facet of play from their offloading in the forwards, to their pacey backs out wide, but after weathering the early storm Beverley made a bit more of a fist of things in the second half.

Dore Moor was in immaculate condition from the previous outings Beverley has experienced there, and with the sun out it was expected that running rugby was on the menu for the day.

Beverley started the stronger and into a light, breeze found themselves putting pressure on the Tigers line, but a crucial turnover resulted in a clearing kick from the Sheffield scrum half which thankfully bounced kindly for Beverley fullback Jamie Gill. However, a following wayward pass was intercepted, and Sheffield moved quickly to the left flank, and the first points were on the board. Beverley could well feel hard done by putting the early pressure on but finding themselves under the posts and 7 points down.

The game restarted, but Sheffield were in no mood to slow their play down. Strong ball carrying by the forwards set up a platform for their backs to make in roads, and Beverley found their line under siege again but some solid defence from the visitors stopped another score, and an attacking scrum was awarded 5m from the Beverley line. This optimism was short lived with the referee awarding Sheffield a penalty try from the resulting scrum for intentional wheeling of the scrum. Ten minutes gone and Beverley were already conceding more than a point a minute.

Beverley restarted and took play down into the Tigers line, but they couldn’t compete with the offloading game by the men from Door Moor, and they found themselves in the Beverley half again. A knock on from an attempted intercept by Sam Atiola resulted in a another scrum from 22m out. This time it was the Sheffield No.8 making a solid run forcing the strong tackling Phil Duboulay to be committed. Quick play ensued and the ball moving to the right this time for the Sheffield winger going in untouched in the corner. The conversion was missed but still left Beverley with a lot of work to do at 19-0.

It was déjà vu again for Beverley at the kick off where Sheffield were able to waltz through some pretty poor defending. The Sheffield backs found themselves in acres of space on the flanks and 2 more tries ensuing allowed the Tigers some comfort, and it was turning out to be a training run for them at 33-0.

Regardless of the score line, Beverley were finally beginning to get themselves into the match with 10 minutes of the half remaining. A yellow card for Sheffield allowed the Beavers to build some momentum, and although they didn’t end up scoring in the half, it was felt the players were slowly regaining some confidence.

The second half began, and Beverley continued where they left off in the first half and began to regain some possession and field position. A change in the back line with Junior Tupai slotting back in the midfield paid dividends early with a short pass to Atiola, who was able to use his strength to get himself over from 20m out and Beverley were up and running. The line out was operating better, and this allowed the Beverley forwards to gain some parity with their bigger opponents.

Numerous infringements by Sheffield resulted in another player having a 10min rest with an attacking line out opted for. Beverley with all their will went close again for the line but a knock on once again allowed the Sheffield backs to make their way up the field to score again.

A reoccurring theme for Beverley in the opening games whilst on attack with another turnover and a try at the other end. Beverley by now were holding their own, but it was only a matter of time, and they were opened up again with another unconverted try.

Sheffield were a very tidy outfit and look like they could well push for higher honours. They were very well organised and have a back line that complimented the brutalness of their big forward pack. Beverley have always been slow starters and this needs addressing if they are to stay in this league.

At 43- 7 it may be difficult to see the positives but Beverley are capable of better, and this was evident in small patches against a good Sheffield side.

The next two weeks bring two crucial home games for the Beavers & they can take heart in reinforcements returning from injury to add strength & the much-needed stability to the squad that they have been lacking so far.