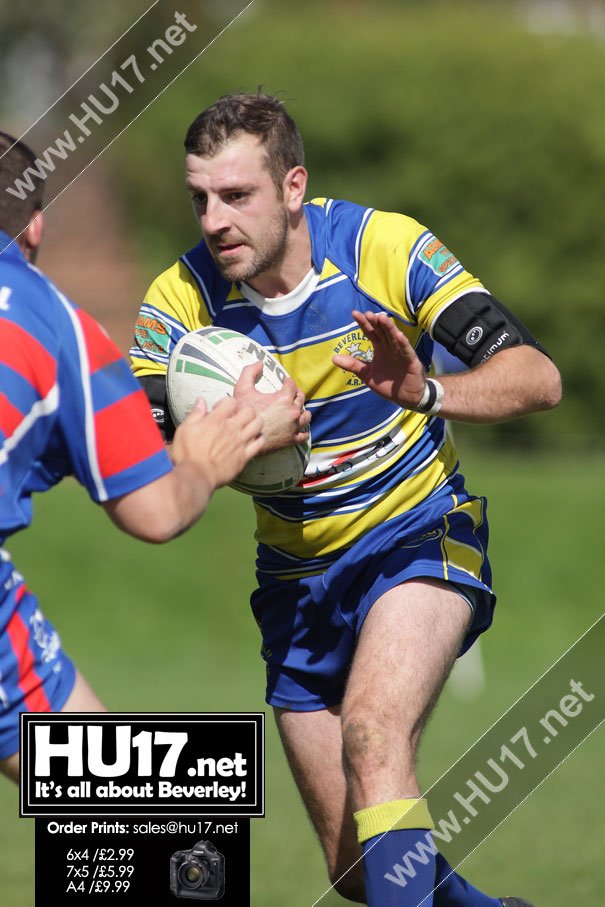 This was a patchy performance from the blue and golds in which they produced some great attacking plays along with some handling and defensive errors. However, they came away with two league points in an incident packed points fest at Tower Grange last Saturday afternoon.

The hosts took the lead in the 10th minute with their wingman pouncing to score an unconverted try wide out resulting from a kick to the corner on the last tackle. The visitors then edged their way into the game with some good set completions.

This led to Steve Connolly’s well weighted kick on the final tackle being caught by Lee Falcus, who juggled the ball before holding on to score beside the posts. The hosts regained the lead just minutes later following a spell of pressure on the Beverley line. The try was not converted.

Beverley then enjoyed their best spell of the game which if had been sustained would have seen a much more convincing victory. Dockers spilled possession close to their own line.

The resultant set of six ended with Jordan Mouncy switching play to the blind side to send the strong running Craig Morfitt over in the corner for a try that was improved by Watkin. Shortly after another clever switch of play to the blind side by Steve Connolly sent Craig Morfitt in the clear who then drew his man perfectly to send Jake Hart-Fisher over behind the posts.

The visitors continued to turn the screw when a good breakfrom Mike Cooper down the right flank which set up the position for the ball to be shipped to the left. The move ended with Steve Connolly’s astute inside pass sending Ryan Watkin over under the posts for him to convert his own try. Some slack defensive play then allowed the home side to pull back an unconverted try on the stroke of half time and reduce Beverley’s lead to 24-12.

All the early moments of the second half saw a controversial try awarded to Dockers in which the referee appeared to blow his whistle to stop play but then claimed to have waved play on which resulted in the Beverley players stalling and allowing Dockers to score beneath the posts. The try was this time improved.

With Beverley’s lead being eaten away, a quick response was needed, and it came in the shape of Ryan Watkin. The hosts lost possession close to their own line and off the next play, Watkin squeezed over for a try that took some scoring with a flurry of defenders around him. It was too wide out to be improved.

Dockers again replied with another disputed try in which the referee appeared to give the home side the benefit of the doubt despite being unable to see whether the ball had been grounded with a swarm of blue and gold defenders around the attacker. The match began to boil over at this stage of the proceedings.

An altercation involving several players ended in the referee dismissing Louis Hubbard together with a Dockers player. In this ding-doing affair Beverley again replied.

Connolly again switched the ball to the blind side for Craig Morfitt to sprint away and return the ball back inside for Connolly to score besides the posts. Watkin again converted. Still the sizeable away following could not relax as the hosts hit back with another converted try in the 70th minute. The scores now stood at 34-30 in favour of Beverley.

The visitors finally got some composure when Steve Connolly steadied the jitters with a dart from dummy half to score. This was quickly followed by Ryan Watkin’s switch of play to the left to send Ben Calvert over to finally put the game to bed.

Steve Connolly was a deserved man of the match with a two try display supplemented by being instrumental in nearly every other try that the blue and golds scored. Ryan Watkin was another stand out performer with two very well taken tries and was very busy in defence.

This Saturday Beverley are at home to Three Tuns. This is expected to be a tricky encounter as the two sides met in a pre-season friendly with Three Tuns being the narrow victors.

Coach Pat Howdle is hoping for a big response from his charges following a slightly wobbly performance last week. The match which promises to be a tasty clash kicks off at 2pm at the Beverley Leisure Centre. The club hopes that a big crowd can be the club’s 18th man and can urge them on to a win.