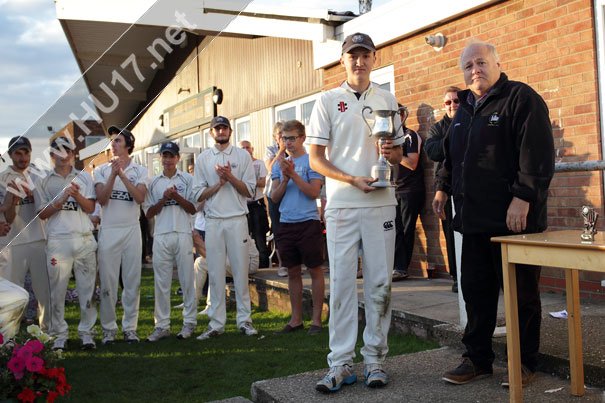 Beverley Town picked up their second trophy of the weekend when the Intermediate XI had a resounding success in their Intermediate League play-off final. The Intermediate teams must be made up of at least eight Under 18s and Beverley fielded just two over-age players in the final.

Beverley had been chosen by the league to host the match and a good crowd saw Town bat first but fall quickly to 12 for 2. A fifty partnership between Tom Norton and captain Jamie Roe was only ended when Roe was out for 22.

Norton (25) followed at 69 for 4 and a fifth wicket fell at 93 when Brad Graham was needlessly run out. At 96 for 6 Town looked in trouble but their two over-age players Rich Simpson and Rob Fish came to the rescue with a partnership of 60 halted only when Simpson was out for a run a ball 32. Fish went on to make 51 retired and Tommy Hudson’s cameo at the end of the innings helped Town close on 175 for 9 from their 40 overs.

Two wickets for a determined Kez Thompson saw Castleford reduced to 16 for 2 and one, beautifully clean bowled, for Brad Graham saw them 19 for 3 and well behind the run rate. Roe (1-25), Charlie Bough (1-21) and Greg Whyley (1-30) gave excellent support to Thompson (3-25) and Graham (2-12) as Town worked their way through the Castleford batting line-up.

Town took five catches, the best a diving effort from Roe, and threw two run outs in a good fielding display. Conner Fisher made an excellent unbeaten 58 but Castleford were eventually bowled out for 127 in the final over to give Town the trophy for the first time in their third year in the competition.