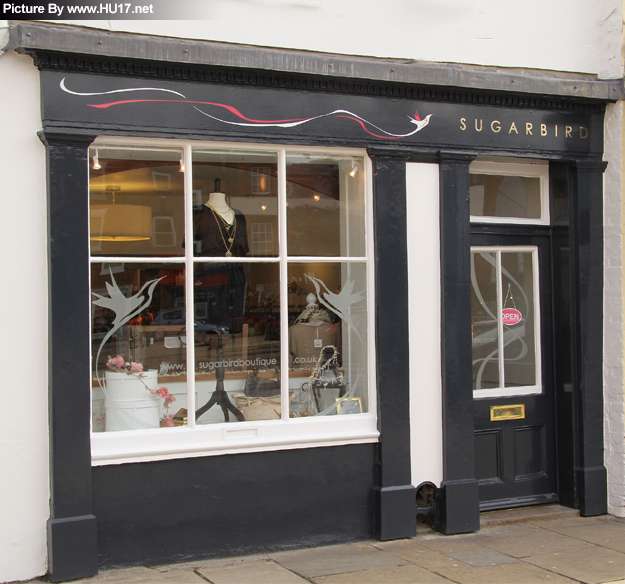 Beverley is set to lose another independent retailer as Sugarbird Boutique confirmed that it will cease trading in Beverley later this month.

Sugarbird Boutique joins The Real Sandwich Company and Burtons along with a host of other stores that have pulled out of Beverley in the past year.

The independent retailer blamed East Riding of Yorkshire Council and their project to give the town centre a facelift for the closure saying the recent improvement work have had a catastrophic impact on their business.

Sugarbird Boutique which has been trading on Saturday Market in Beverley are the latest in a string of shops that have either closed since the works began.

“Our decision to close to has not been taken lightly but the effect of the Saturday Market refurbishment works has had a catastrophic impact on our trade.”

“We opened Sugarbird in February 2010 and have been trading for 4 1/2 years now. After a great start, we had a dip during the recession but successfully rode that out.”

A decline in sales and a drop in footfall in Beverley since the work was completed has also seen other stores close their doors. By the end of summer, the once busy Saturday Market is could end up with up to six empty retail units.

Retailers in the heart of the town were left furious last June after the launch of the Georgian Quarter when a ‘select’ number of retailers getting a cash boost of £10,000 while they struggled to trade in a square that resembled a building site.

A recent relaunch of the Market saw the traders who were affected by the works all but ‘excluded’ from the event as organisers opted to use businesses from outside of Beverley. The council justified the decision by saying the event was not theirs but left many business owners in Beverley very angry.

“Since November last year sales have been decimated as customers have stayed away from Beverley Town centre and the parking chaos that has ensued with the works.”

“We appreciate that in the long term, the new look of Saturday Market may help improve the attraction of Beverley to customers.”

“However, without sounding dramatic, time has run out for Sugarbird. On a more positive note, Lucy and I have no regrets about our experience running Sugarbird.”

“Over the years we have developed a fantastic group of customers and met some wonderful people.”

“The social element of our business is the part we shall probably miss the most. With that in mind, we would like to thank all of our wonderful customers who have given us their support and custom over the last 4 1/2 years.”

The full impact of the maintenance scheme is yet to be felt, and more businesses may find themselves pulling out of Beverley.

High rents are making it increasingly difficult for would be independent retailers from opening in a town centre that was once described as the Jewel in the Crown of the East Riding.