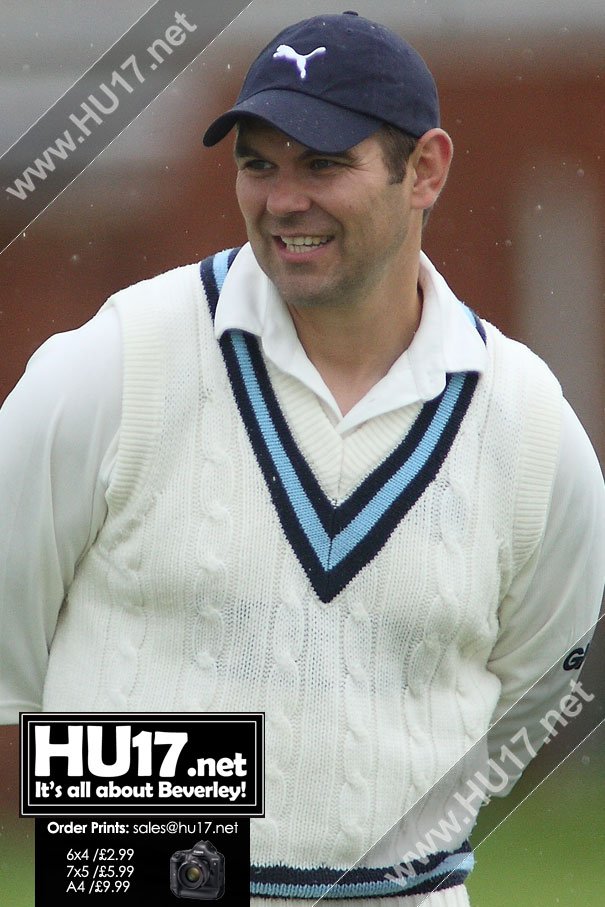 Chris Charles was without question the sat r man on the day as he scored an unbeaten 136 as the Beverley claimed all 30 league points.

“It was a big win that we had to work very hard for, it was great to see Charles get his first century, after some of the unlucky decisions that he got last year it’s good to see him start to rack up some big scores.”

Despite losing a wicket in the first over and moving unsteadily to 32 for 2 Alex Nightingale and Chris Charles brought about some semblance of order but when the former went for 33 Town had still only reached 74 for 3.

Charles and Tim Fordon then changed the whole complex of the game with a massive unbroken partnership of 176.

Charles was much the senior partner as he progressed to 136 not out with twenty-three fours and four sixes while Fordon made a more sedate 40 not out.

Their rapid scoring, including 25 runs of the last over of the innings, allowed Beverley to declare at 250 for 3 from just 40 over’s giving the home 50 over’s to bowl the visitors out, a smart move by skipper Welburn.

Hornsea started their innings well and Hornby made 31 before being clean bowled by Tommy Hudson (1-12).

Joey Franklin, on his 3rd XI debut, and veteran Iain Sugdon (3-24) helped Town work their way through the Hornsea batting line-up, with keeper Tom Norton taking two catches, but it was part-time bowler Alex Nightingale who made some vital breakthroughs.

He claimed 4 for 36 from his six over’s. The young Hornsea last pair offered stubborn resistance causing Welburn to swap his bowlers in order to secure maximum points and it was Franklin (2-16) who had the final word with a catch by Welburn removing the last man in the 47th over.

Hornsea made 150 all out with extras (47) outscoring all of the batsmen.

Welburn was clearly pleased with the win and the efforts of his bowlers, and feels that Nightingale is offering the team not only runs but a real option as bowling threat, he said;

“Nightingale has proved over the last three weeks that he has the quality to go and get runs every week, he knows that he should’ve pushed on and got a big score this week. His bowling is really coming along and he was crucial to our win.”

“I’m sometimes worried about his shoulder but he always wants to put the team first and this week he got the breakthrough we needed that helped us go on to win the game.”

“Franklin came in and made his third team debut and bowled really well picking up the final wicket to win us the game.”

Although he took the winning catch the skipper was critical of his own bowling efforts, he said;

“I didn’t bowl great this week, but it’s always great to be involved and fortunately I hung on to two very simple catches, we had to take all our chances to get the 30 points.”