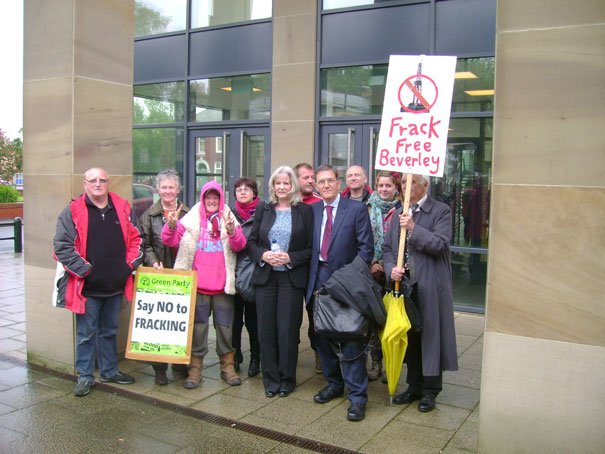 Val and Jon Mager appeared at Beverley Magistrates Court this morning charged under the Trade Unions Act, after being arrested at Rathlin Energy’s Crawberry Hill well site on the 15th May.

Val is a nationally exhibited artist and retired teacher, Jon is a former director of education at East Riding of Yorkshire Council.

They intend to plead not guilty, so the case will go to trial on 31st July.

However, they had been living with restrictive bail conditions which banned them from an area around the site, that included Walkington village north of the B1230. This meant they were unable to attend the public meeting last Monday 19th in Walkington Village Hall, or any of the pubs.

The prosecution asked that, “As they have been seen in the vicinity of the other well site, West Newton the bail conditions be amended to incorporate an area around that site too”.

The bail conditions were dropped and they were bailed unconditionally.

Helen continued, “This is a victory today, and their human rights have been restored”.

As the case will now go to trial Jon & Val have been advised not to comment on the case.

Hull and East Yorkshire Frack Off, HEY Frack Off opposes Rathlin’s testing at Crawberry Hill, and supports their actions.

“The government said it wants to go, ‘all out for shale‘- and it didn’t exclude East Yorkshire.”

“They are about to test the shale rock, and if those tests say they can make millions from gas under our countryside, which will require thousands of wells, then they will. Unless the people of East Yorkshire stop them.”