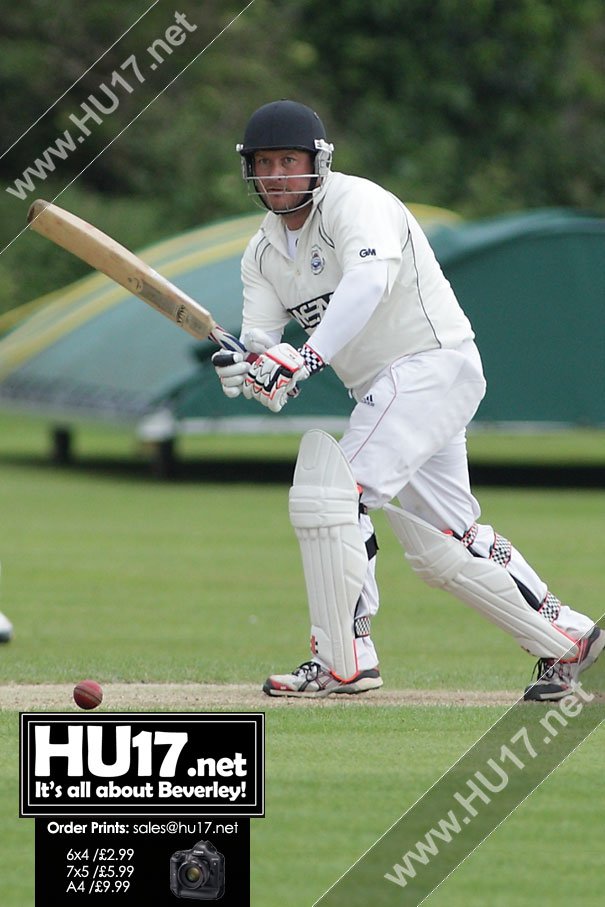 Bad weather meant the game was reduced to just 40 over’s per side, and it was Beverley,  who after losing the toss were tasked with batting first in conditions that their skipper Jonathan Fisher described as hard for batting.

Faisal Abid got off to a good start. The attacking opener wasted no time in ‘getting in’ reaching 34 before he came unstuck trying to cut the ball, he said;

“I felt good out there and was scoring well. I was trying to cut the ball away. It is a shot that is part of my game.”

Fisher was for the second consecutive match the top scored for Beverley. He dug in and battled it out at times in the drizzle making a half century with Beverley going posting a score of 170 from their 40 over’s.

Speaking after the match Fisher said;

“It was hard for batting, We had to really work hard for our runs but knew we were in with a good chance of a win with 170 on the board.”

Good batting was backed up by even better bowling figures and performances by the home side at wet Norwood Recreation Ground.

In reply, Zingari who are now just one point off the bottom of the table managed just 77 runs as Beverley’s bowlers made light work of them.

Guy Brumfield was the top bowler for Beverley taking five wickets ending the match with figures of 5-13.

“The bowlers won the game for us again today. There was some truly great bowling by Brumfield, and he was supported well by Jamie Roe and Matthew Mudd, overall this was a good all round team performance.”

Victory sees Beverley move to within just two points of the current league leaders and arch rivals Fenner. Next weekend, Beverley travel to North Yorkshire to face York, who are currently mid table, a match Fisher will be looking to get another 30 points from.