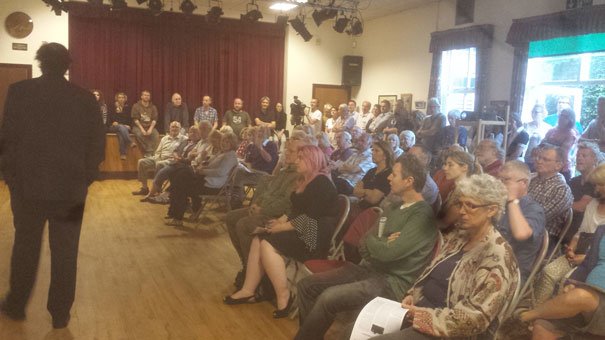 HEY Frack Off have issued a warning for the residents of East Yorkshire as opposition continues to grow against the work being carried out by Rathlin in Walkington.

HEY Frack Off said in a statement released after the successful public meeting in Walkington;

“Rathlin are just prospectors mining for data in the shale rock, and if they strike gold they’ll sell out to the big guys like
Total, and these two wells will just be the first of hundreds across the East Yorkshire countryside.”

Earlier in the week around 100 people packed out the village hall in Walkington as residents keen to get more information about what’s going on in their town and how it will affect them.

Meeting with the protestors, they could express opposition to the oil and gas operations taking place a mile up the road from their village, and get organised as they prepare for a long battle to fight any plans of Fracking locally.

Villagers explained why they fought so hard to get a “no fracking” planning condition on the well site, and why they “feel the spirit of that condition is about to be broken.”

Protectors who have already given up many personal comforts told the community;

“We’re here to defend you and your community against the impacts of this industry.”

Protesters also allayed fears about litter, showing images of the former sites at Barton Moss and Balcombe after clean up.

Although no fracking is taking place at the moment if gas is found the company Rathlin Energy will resubmit new a new planning application.

Fracking is thought to be very harmful to the local environment, local cattle farmers have already expressed their concerns that if fracking was to go ahead their live stock could be poisoned.

Fracking has been banned in France and was recently linked to a Earth Tremor in Blackpool. Other issues faced by residents living in close to a fracking mine area is obtaining home content insurance and the possible decline of the value of your home.