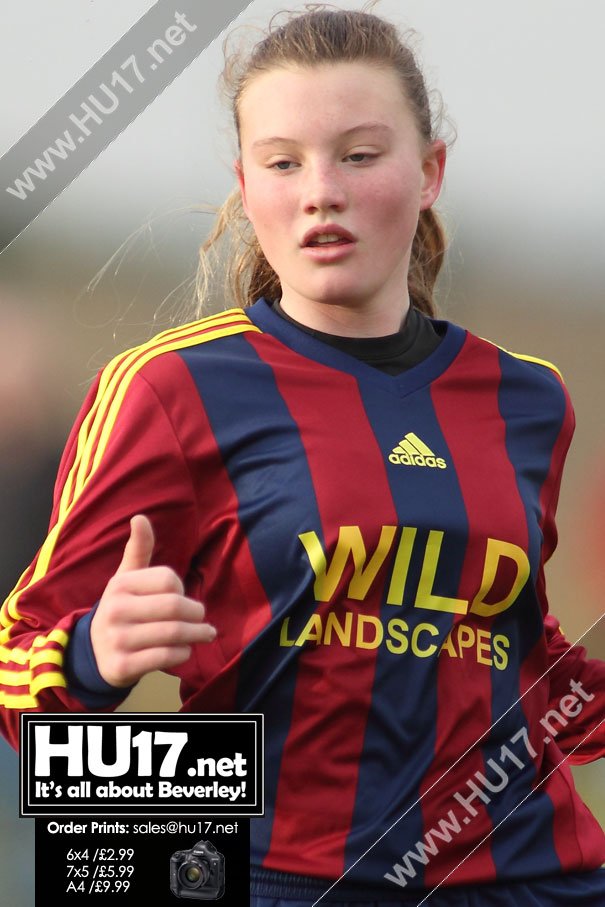 From the kick off the Yellows were on the attack with wingers Tonya Storr and Charlotte Holliday attacking down both wings. The first goal came after five minutes when a pass from defender Amy Radford found Charlotte Holliday on half way, Holliday beat two defenders on a run down the wing before cutting inside the penalty area and hitting a controlled left foot shot from 12 yards into the right-hand corner of the goal to make the score one nil to Mill Lane Yellows.

Buoyed by the early goal the Yellows poured forward and were rewarded by a second goal soon after when Chloe Wheeldon hit the back of the net from just inside the area after a through ball from midfielder Morgan Nagee. Three further first-half goals followed as Mill Lane Yellows continued to enjoy both possession and territorial advantage, two penalties from Morgan Nagee after Holliday and Wheeldon had been brought down in the area and the last goal of the half and Holliday’s second of the game after a Marie Russell corner was forced over the line to give Mill Lane Yellows a five nil lead as they totally dominated their opponents.

As expected Malet started the second half in a more determined mood with Amy Mathews and Laura Stockdale trying to get them back into the game. The Yellows would have none of this and held firm with Lucy Crockett, Amy Radford, Courtney McConville and Emily Holliday in front of goal keeper Courtney Lees blotting out any Malet attack. After absorbing a period of early second half pressure the Yellows showed their dominance, and the points were secured with two further goals from midfielder Tonya Storr after two superb tackles and strikes on goal from the midfielder in a great second half performance.

The Yellows played out the final 15 minutes as Malet came forward trying to restore some respectability to the score line, but ultimately, Mill Lane Yellows controlled the final passage of play and take control at the top of the table. A brilliant performance from the Yellows full of desire and commitment as they finished their opponents slim hopes of the title, well led by Courtney McConville, who tracked and harried her opponents throughout the game ably supported by Alice Johnson, Chloe Wheeldon, Courtney Rushworth and Molly Pluves who were outstanding throughout.

Man of the matches went to Courtney McConville who has been superb for the team this season and Chloe Wheeldon for a hard-working performance and a fine strike for the second goal.