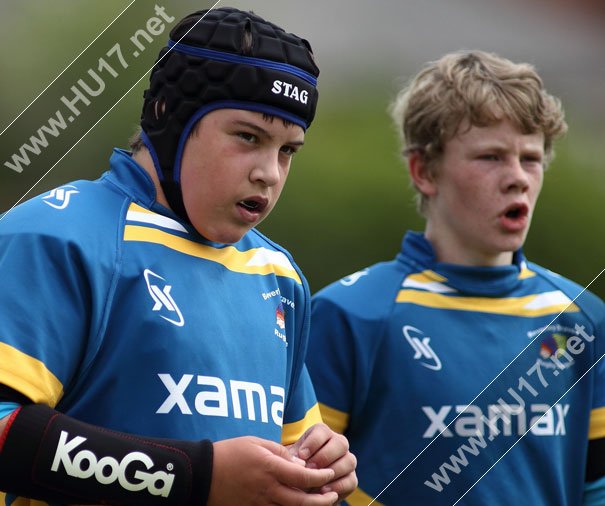 Beverley Braves and Hull Wyke under 12s served up an exciting game of rugby league that showed little evidence of the fact both teams have not played much competitive rugby for some time.

As with last year’s game between the two sides, the result was in doubt up until the final whistle with Wyke making the most of their chances to win 16-10.

Played in dry and breezy conditions Wyke asked a lot of questions of the Braves defence but last year’s top tacklers, Ethan Rowbotham and Oliver Loney picked up from where they left off last season with another great defensive effort. They were not alone. Wth Joseph Dennis putting in some brave tackles as well before taking a knock to the head in the second half and having to come off early.

Having weathered the storm it was time for half-backs Lewis Egan and Marcus Walker to weave some magic, Egan was always looking for gaps in his usual style whilst Walker had a great game with the boot – several times his kicks resulted in Wyke turning possession back over to the Braves.

After one of these kicks forced the dropout, Jack Turner, who revelled in his new position at hooker – building up a great understanding with his half backs – was pulled up on the line. This was typical of Turner’s performance throughout the match, and this along with a strong tackling stint earned him the man of the match award.

After this pressure, Wyke broke down field and scored two tries in quick succession, one converted, to make it 10nil. The Braves kept their heads up and importantly continued to work as a team with some good touches from Ryan Deane and the inevitable strong running from William Wallis relieving the pressure from the Wyke defence. William Kirkup and Dylan English had limited opportunities as they rotated between wing and full-back but neither let the team down when they were called upon.

The Braves soon got the break their hard work deserved. A Walker kick was charged down, but he was first to pounce on the loose ball and then outpace the cover to score in the corner making the half-time score 10- 4.

This great Braves effort was without both first choice props, who were unavailable but Loney stepping up from the second row repeatedly punched holes in the Wyke defence and was supported by Matthew Hutchinson who had his best game for some time.

The second-half saw a few changes in personnel with Oliver Gresswell coming on to the right wing and having a solid game, the same of which can be said for Ewan Morton, who filled the fullback berth whilst Harry Newton picked up the left wing – putting in two cracking tackles to halt Wyke attacks. All these changes allowed the ever improving Thomas Cohen to move off the wing, where he had put in some great defensive work to take an equally impressive stint at prop – making him, the Braves answer to Richard Whiting (not bad for a Rhino’s fan).

The Braves started the better in the second half and as the ball moved left George Lees could use his pace to score in the corner but in doing so was taken high resulting in a penalty try, Turner converting the resulting goal kick from in front of the sticks.

At 10all, it was a humdinger and neither side were holding on for the draw. Beverley moved the ball left again looking for that decisive score but the ball went to ground, and Wyke were quickest to pick the ball up and race through from half-way to score the game sealing try.

If this is evidence of what is to come this season both teams will be very entertaining to watch, this was good rugby, played in the right spirit it was just a pity one team had to lose.