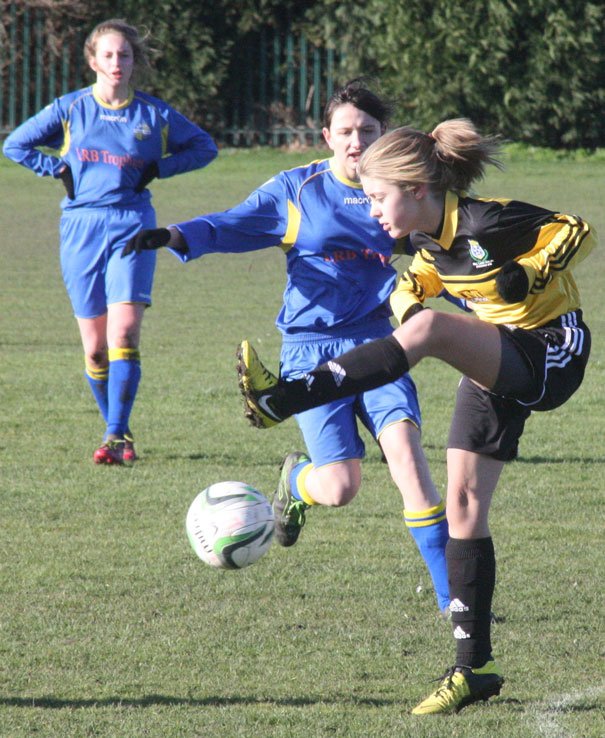 Mill Lane United travelled to Selby College hoping for a win to keep their momentum going in this U16 East Riding Girls Football League fixture against the Brayton Belles.

These two teams have been involved in close matches during the two seasons since the current Mill Lane team formed, and have yet to be separated by more than a single goal. In fact the score in all three of their previous meetings has been four goals to three, with Brayton the victors twice and Mill Lane once. No doubt it was knowledge of the importance and difficulty of this fixture that resulted in three of the thirteen strong Mill Lane squad turning up to play whatever part that they could while suffering from illness.

Brayton won the toss and elected to play the first half with the fierce wind at their backs. In the opening moments it was immediately obvious that the conditions would play a part as although Brayton piled pressure onto their visitors they were frustrated to see the final ball carrying out of play on the wind.

It was an overly strong Brayton through ball that presented Mill Lane with their first opportunity. Emily Hood in the Mill Lane goal was quick off her line to gather the over-hit ball and, having spotted that Brayton had left themselves light at the back, released the ball to the Mill Lane midfield. The perfectly weighted pass put Keely Forward through and she duly delivered the opening goal. With all that had happened in the furious opening exchanges it was hard to believe that only three minutes were on the clock as the opening goal went in.

Despite falling behind Brayton were unfazed and continued to push the visitors back into their own half. Mill Lane contributed somewhat to the pressure that they were under by playing the wind-shortened goal kicks to players that were grouped too centrally and consequentially giving their defence a lot of work to do in the danger area. But again Brayton were undone despite the pressure that they were applying when Forward put her team two goals ahead with only quarter of the game gone.

From the re-start Brayton won a corner kick and got their lucky break. The corner resulted in a scramble around the goal line, and the loose ball virtually blew into the Mill Lane goal at the back post. But although the wind played its part in the Brayton equaliser there was no luck involved. Mill Lane had pushed too high as the Brayton keeper released a long ball that fell perfectly for the striker to break free and score. The half finished two goals apiece.

The second half was an almost perfect re-run of the first, but this time with the roles reversed – the away team piling on the pressure and the home team looking to break. But in this half the score wasn’t equal. Another Keely Forward goal, and a superbly accurate long range shot from Jodie Brown, gave the two goal advantage back to Mill Lane. Brayton managed a late goal that restored the score line to the ‘standard’ four goals to three that has become traditional in matches between these teams.

Mill Lane named a defender their player of the match, which may seem odd in a game that had seen one of their forwards score a hat-trick. But the game was defined by the way each team handled the errors caused by the fierce blustery wind, and Chloe Johnstone was simply outstanding in this regard. Each time that her team-mates found themselves under pressure Johnstone stepped in with a well timed interception. This was never more evident than in the dying moments when she cleared off the line to ensure all three points went to her team.