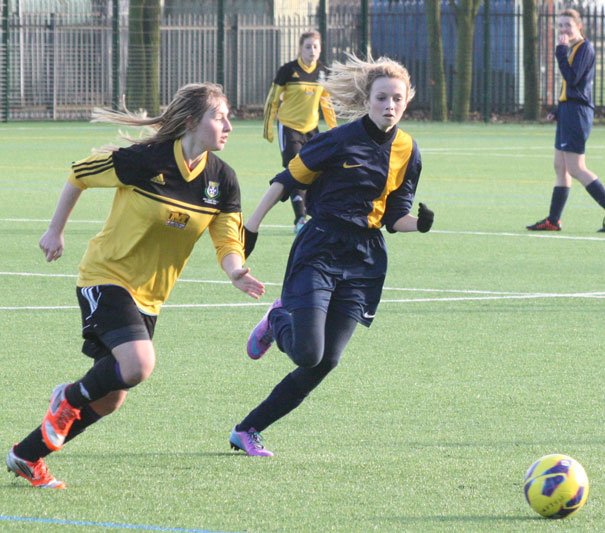 Malet Lambert were visitors to Mill Lane United’s Andrew Marvell home ground for a league cup clash that promised to be a close encounter if previous meetings between these two teams were anything to go by.

Mill Lane United have been a little ‘slow out of the blocks’ in recent matches, but in this fixture, they showed no hesitation in getting forward from the moment the whistle blew.

In the first ten minutes of the match, they put Malet under sustained pressure that was absorbed by a defence that were unflustered and equal to the challenge. The visitors showed that they too were a real goal scoring threat each time that they turned defence into attack with impressive speed and directness.

This was especially the case on one occasion when Malet’s Aimee Mathews got in behind the Mill Lane defence and delivered the sort of cross that really deserves a goal.

At this point, the match was finely balanced with Mill Lane arguably moving the ball around more freely but Malet harrying all the time and jumping on every loose ball.

Malet’s workrate, for a spell later in the first half, began to pay dividends, and they could push the home team back into their own half and test the Mill Lane defenders. The breakthrough nearly came from a Malet corner, when Emily Hood in the Mill Lane goal tipped the ball out of immediate danger only to see it returned into the six-yard box where she bravely threw herself onto the ball in the midst of a melee of feet. Now it was Mill Lane’s turn to play their football on the break, and they came close to finding an opening from one when Millie O’Neill received the ball and dropped it back to Jodie Brown, who saw her shot go just wide of the post and inches out of reach of a marauding Keely Forward.

Throughout the half both teams were finding half-chances in front of goal, but it was going to take something special to break down either defence.

It came in a Mill Lane moment of pass and move football that tore through the visitor’s defences and culminated in a clinical Keely Forward goal from a wide angle. The half finished with just the one goal separating the teams, but Mill Lane could have found themselves two up if it hadn’t been for the excellent Malet keeper sprinting from her line to narrowly beat Emma Smith to a Forward cross.

This match was still far from decided as the second half got underway and Mill Lane started like they knew it. In the first half, they had been creative enough but hadn’t matched the sheer hard work of the Malet girls, whereas now they were challenging more assertively, particularly in midfield.

Thanks to the increased urgency from the home team, Malet had been under some protracted pressure when Millie O’Neill unleashed a shot towards the top corner of the goal that was brilliantly saved by a full-length athletic dive from Malet’s keeper. O’Neill’s disappointment was soon forgotten when the ball fell to her, after Malet’s keeper had parried a Courtney Osler header, and she scored Mill Lane’s second.

In the end, the game was put out of reach of the visitors by a Keely Forward goal that was straight out of the top drawer. Twenty yards from goal, and with two defenders in close company, Forward flicked the ball over her markers, turned and unleashed a shot that left the keeper with no chance and secured Mill Lane’s place in the next round of the league cup.
Mill Lane United named Emma Wray their player of the match for her constant disruption of Malet attacks and her subsequent ball distribution. Special mention is also due to defenders Chloe Bell, Chloe Johnstone, Kaytie Houldridge and Hannah Smith, who responded superbly to the constant threat posed by the visitors.

Overall, a great advertisement for all that is good in football, and both groups of players should be proud of the part they played in a competitive, free flowing and entertaining sporting spectacle.