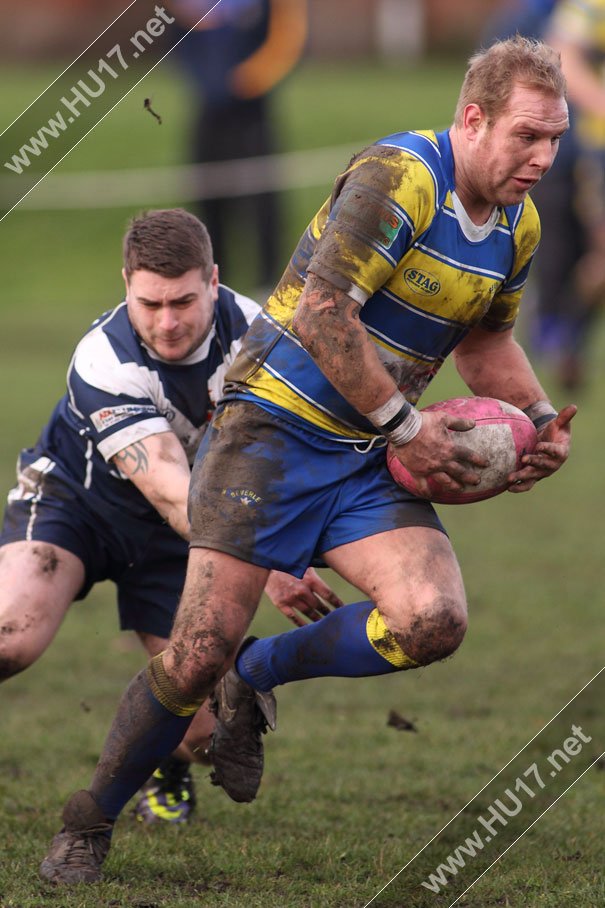 The blue and golds clinically disposed of a struggling but spirited Haworth Park outfit at the Beverley Leisure Centre on Saturday.

Coach Guy Adams was forced to re-shuffle his Beverley ARLC side prior to kick-off with Ryan Watkin and Gavin Platt serving a one match ban for their sending off in the Fenners game just before the Christmas break. Mike Cooper was moved up to the scrum-half position to form a half-back partnership with Ian Lane.

On a damp over-cast afternoon, the hosts went straight on to the attack. Louis Hubbard went over after five minutes, and the lead was quickly increased courtesy of a Steve Connolly try taking on several defenders to score.

The visitors then enjoyed their best spell of possession and territory in the game forcing two-line drop-outs in quick succession, but Beverley’s defence was more than equal to the task.

The game remained scoreless until the 28th minute when Rich Etherington went over with a bustling run. Two minutes later Etherington, with not much space to work in got a pass away to Daryl Gregory, who avoided being bundled into touch and raced away to score.

A lapse in concentration by the hosts saw them fumble a kick on the last tackle, and Haworth pounced to score. Beverley quickly regrouped and a

strong drive from Lee Stevens saw him get a pass away to send Louis Hubbard over for his second try on the stroke of half-time.

Beverley quickly came out to turn the screw in the second half and Tom Moore quickly weighed in with a try. The visitors managed to get down-field but threw a long speculative pass that went straight into the hand of Daryl Gregory, who sprinted 70 meters to score.

Soon the points began to rack up and another strong surge from Lee Stevens saw him pulled up short. A quick play the ball saw Gavin Proctor go over from dummy half.

Proctor then scooted away to make a break that set up the position for Joe Wileman to go over from close range. Shortly after Steve Connolly added his second try.

Beverley were now in complete command began to open up. A spectacular breakdown the left wing by Daryl Gregory saw him evade several defenders but could not evade the last defender so was denied a hat-trick.

More spectacular play saw Connolly, and Davidson combine on a long break which sent Nathan Hoggard scampering away towards the right-hand corner. Hoggard was pulled up short but quick hand to the left sent Callum O’Connor over. O’Connor then added his second try after previously going three years without scoring!

With the final whistle fast approaching Tom Moore converted for his tenth goal of the afternoon, many of which from wide angles.

Man of the match was Daryl Gregory whose strong and tricky running was a constant threat against a plucky visiting outfit.

This Saturday Beverley are away to Fenners kicking off 2pm at Marfleet Lane.