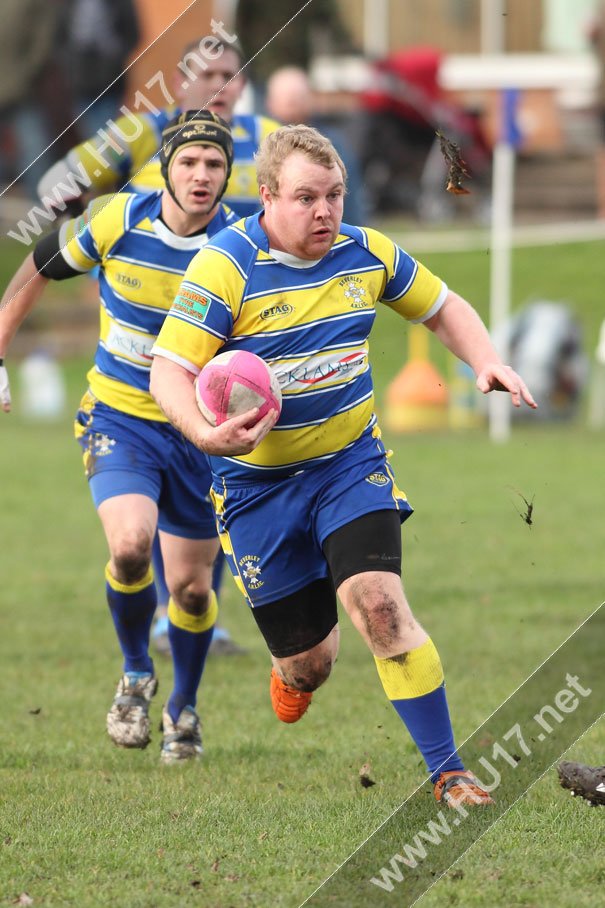 The blue and golds finally prevailed in this incident packed encounter at the Beverley Leisure Centre.

At half time coach Guy Adams delivered some home truths to his under-performing troops. He described his sides first half performance as ”The worst 40 minutes I have seen since taking charge of Beverley ARLC.”

The first half was a lack-lustre affair between two sides low on confidence. The visitors looked slightly the better of the two sides and took the lead in the 2nd minute with a try. The conversion sailed wide in the difficult blustery conditions. They increased their lead with another unconverted try in the 20th minute.

The hosts had a number of spells of pressure inside the Fenners 20 meter zone but found converting chances difficult. They finally opened their account with half time fast approaching. Gavin Proctor was pulled up short but a quick play saw the ball shipped to the right. Ben Calvert scored wide out for Watkin to add the difficult touchline conversion, judging the wind perfectly.

Stirred by Adam’s half-time rant, the home side came out for the second half fired up. After one of the several powerful charges during the afternoon by Lee Stevens which saw him stopped just inches short, Gavin Proctor sneaked over from the customary dummy half position. The conversion was added, and the hosts looked to be settling down. However, they allowed the visitors back in the game, panicking in attack and missing vital tackles.

As the visitors made numerical advantage count when Nathan Hoggard was sent to the sin-bin as the game began to boil over. They scored a converted try beneath the posts to lead 14- 12. Minutes later they failed to increase their lead with a penalty shot going wide.

Midway through the half came the turning point. An altercation took place between several players to which the referee opted to make an example. He dismissed Gavin Platt and Ryan Watkin from Beverley and two visiting players. The incident seemed to finally bring the hosts to their senses.

In the 65th minute, a powerful surge by Lee Stevens saw him go over besides the posts for stand-in goal kicker Connolly to convert and give Beverley the lead which they never lost.

The hosts were now in control with the game reduced to 11 a side. Steve Connolly’s smart chip ahead saw him regain control and score. Two minutes later he slythed through the Fenners defence to score his second try.

With Beverley now playing some fluent rugby, Daryl Gregory broke diagonally across the field to send Billy Riby over for his first try in open age level to complete the afternoon’s scoring.

Man of the match was Lee Stevens with Steve Connolly a close second. Both looked to be Beverley’s most potent attacking weapons.
Beverley’s next game is now January 4th 2014.