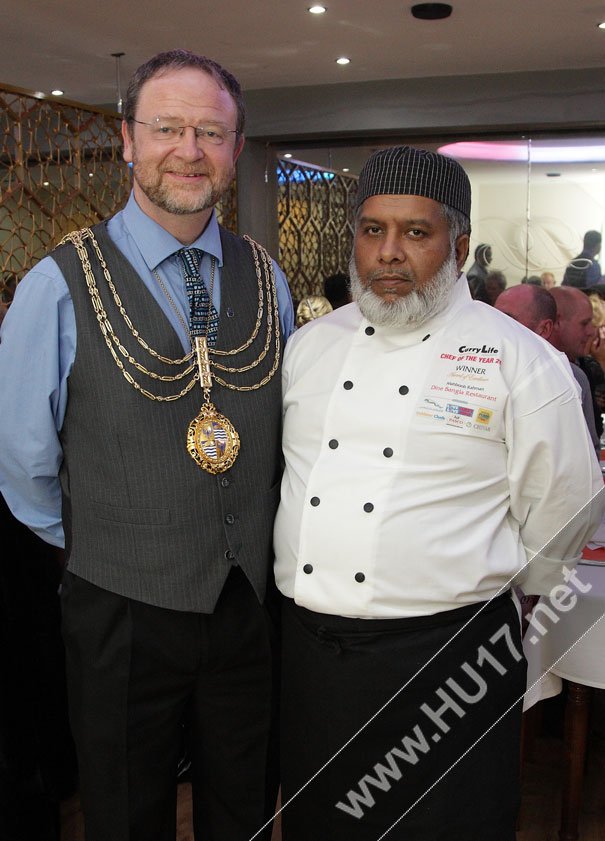 A dinner to celebrate the achievement of curry chef, Mahboob Rahman, is being held at Dine Bangla in Wednesday Market, Beverley.

Mahboob’s culinary skills were recently recognised at the prestigious Curry Life Magazine Chef Awards at the Lancaster Hotel in London, when 44 of the nation’s top curry chefs were awarded for their outstanding contribution to the industry.

Guests included the renowned economist Lord Meghnad Desai and Lord Karan Bilimoria, founder of Cobra Beer. The award was presented by the Secretary of State for Communities and Local Government, Eric Pickles.

Now Mahboob is back in the kitchen but still in the spotlight, creating a showcase banquet for special guests, including the Mayor of Beverley, Cllr Martin Cox on Wednesday.

“We were so proud to receive the award that we decided to hold our own celebration as a thank you to our customers,” said Mr Haider Ali, restaurant manager: “We’re also delighted and honoured that the mayor is able to come, as the day also marks the anniversary of the opening of Dine Bangla.”

Since its opening three years ago in Beverley, Dine Bangla has gone from strength to strength with Ali and Mahboob’s mix of authentic recipes inspired by their native Bangladesh and modern Indian fusion dishes.

“For ten years now, Curry Life Magazine has been recognising the achievement of Indian and Bangladeshi chefs who have transformed dining in the UK and made British curries amongst the best in the world.”

Click Here
How to Safeguard Your Business From ACH Fraud

“Judges were very impressed by Chef Mahboob’s culinary skills, and in particular, his commitment to sourcing authentic, fresh ingredients. He and the team at Dine Bangla deserve every success.”

Chef Mahboob who started work in the curry industry in York and has worked his way up through various restaurants said: “A successful business is a team effort so this award is for everyone I work with. The event on Wednesday is to celebrate their achievement as well as mine.”