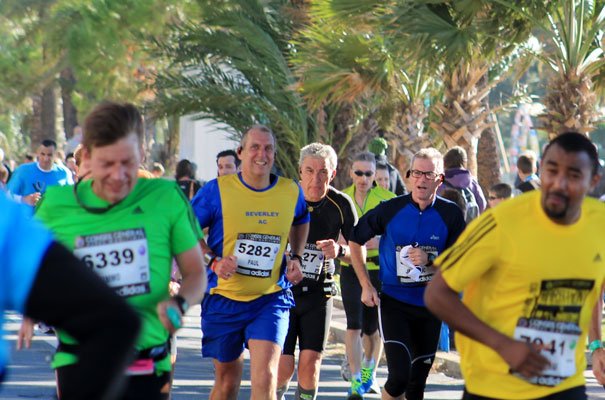 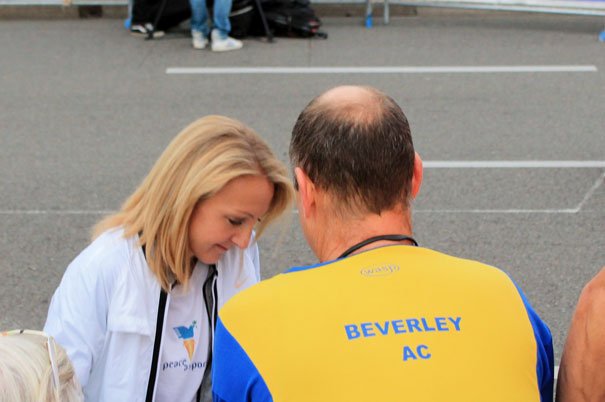 After a long season of 10k, 10 mile and half marathon races, Beverley AC runner, Paul Evans competed in his 5th marathon of the year at the Nice to Cannes ‘Marathon de Alpes-Maririme’ on the Cote D’Azure, South of France on Sunday 10th November. This was the 6th running of this race and the third time Paul has taken part.

An early start (8am) in lovely calm conditions saw the 8000 runners line up on the Promenade des Anglais in Nice to be started by World Ladies record holder Paula Radcliffe who was kind enough to take time out from her busy media responsibilities to have a chat with Paul and sign a book for him.

The first 16 miles are run along the coast line adjacent to the beaches and through beautiful towns with fantastic yacht filled mariners. Lots of the runners were chatting away with smiling faces and appreciating the support along the route.

This was all about to change as the first of numerous difficult hills loomed large. At the top of the first hill people could look to their left across the waters and view the route they had taken up to that point.

Everyone’s pace slowed as the hills also combined with strong breezes mostly into their faces, but the worst was yet to come. The final 5 miles presented a much stiffer challenge with many a competitor bent double fighting against what resembled at times a tropical sand storm. Running into Cannes people were losing hats, glasses and in one case a jacket as the palm trees were bending in the face of the gusting winds.

Although Paul was running strong and looking at a sub 4hr race the conditions towards the end put paid to that and he finished just outside in 4.03.33 but reports that this was “a really pleasing result considering”.

The race is certainly very well organised with lots of fuelling stations that included fruit, raisins, chocolate and sponges, and even the unusual windy conditions should not put people off if they fancy a nice warm race further afield.