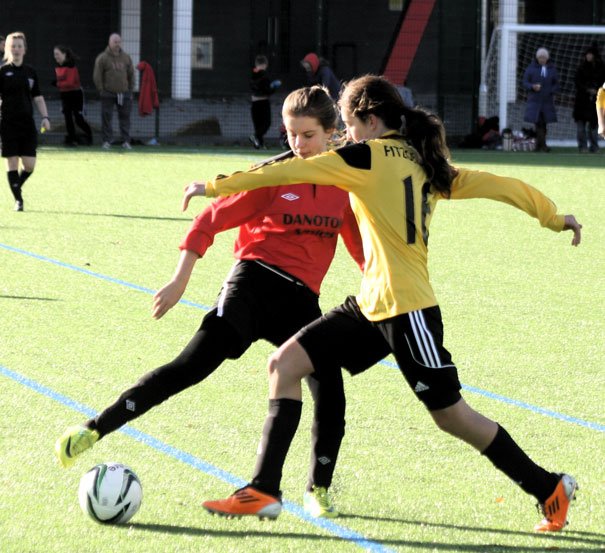 Mill Lane United were hoping for a win after a three match lean spell that had seen them lose ground in the East Riding Girls Football League league and exit the cup.

They played hosts to Hessle town girls, who showed from the kick-off that they too were determined to take points from the fixture.

Hessle started the brighter of the two teams, for 20 minutes having the better possession and pressing forward looking for a goal, but the Mill Lane defence held firm and didn’t ever look much like being breached.

As the match progressed the nervous looking home team started to settle into the game, playing the ball around the midfield with good composure and threatening to break through Hessle’s offside trap with some incisive passing.

The breakthrough fell to Mill Lane after a Hessle attack broke down and Millie O’Neill, the home team’s stand-in goalkeeper, saw an opportunity to release the ball early and start a counter attack that ended with a clinical finish from Keely Forward.

As the half was drawing to a close the game was still in the balance, and Hessle were fighting hard to get back on terms, but Mill Lane’s Emma Smith extended their lead to two goals from a searching Keely Forward cross.

Mill Lane started the second half dominantly, bringing their tally to five with goals from Lizzy Fitzgerald, Keely Forward, and a super headed finish by Jodie Brown. The home team looked like scoring every time they had the ball, the opposition appearing to have no answer to wave after wave of attacks. But the Hessle girls showed great spirit by once more picking themselves up and starting counter-attacks of their own.

They scored two excellent goals in quick succession and might well have got back into the game had it not been for Emma Smith taking the Mill Lane score to six shortly before full time.

In a game where any of a number of players could have been chosen for strong individual performances, Lizzy Fitzgerald was awarded home team player of the match for her outstanding commitment to the team cause.