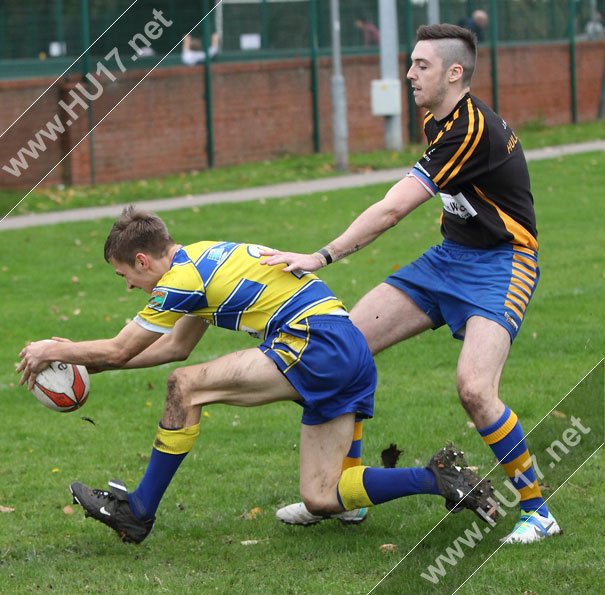 The blue and golds did much soul searching following last week’s defeat and did much to restore pride with Saturday’s performance.

They went into the game minus Ryan Watkin, Jake Hart-Fisher and Gavin Proctor due to holiday, work commitments and injury respectively.

There was, however, no shortage of endeavour, but they struggled to convert pressure into points at vital stages of the game.

The game remained scoreless until the 28th minute until the visitors scored an unconverted try. The home side soon replied when a crossfield kick was pounced on by Nathan Hoggard to score wide out following a fumble by the opposing wingman.

Tom Moore added the conversion, and the host’s tails were up. The forwards especially Lee Stevens and Daryl Gregory began to make inroads and Steve Connolly was lively in the dummy half position.

The sides went into the break locked at 6-6.  The second half saw Beverley with no shortage of quality possession and territory but lack the creativity to break down the defence.  Conversely, the visitors and similar to the previous week seem more capable of punishing Beverley’s mistakes.

They added a further unanswered 18 second-half points to give the score line a slightly flattering look. Ian Lane, Rich Etherington and Steve Connolly was the pick of the Beverley performers never taking a backward step on a somewhat frustrating and penalty-ridden afternoon.

This weekend Beverley ARLC are again at home but in the Tom Beautiman Cup, 2nd round against Haworth Park for a 2pm kick off at the Beverley Leisure Centre.