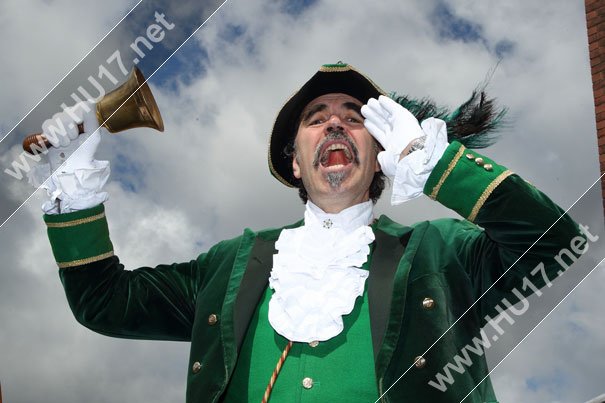 The 2013 British Town Crier Championship was held in Huddersfield over the weekend with 25 of the UK’s best voices taking part.

Michael couldn’t have been more thrilled to once again be crowned Britain’s Champion Town Crier, on which competitors were judged on their clarity and volume, diction and inflection, dignity and bearing.

Regarding the best dressed award, Michael believes that his time spent in the military helped with ensuring that his boots and bell had the appropriate polish.

One of the competition’s subjects was Huddersfield and Michael said: “The Star Trek captain, actor Patrick Stewart, was born in the town so I urged people to set their Satnavs or Transporters for ‘destination Huddersfield’ and if traffic is busy – just beam down.

“I enjoyed delivering that line; however, my competition success didn’t come without sacrifice. I apologise to Hull FC and their fans, but for dramatic purposes I donned a Huddersfield Giants rugby scarf when praising them as a success of the town. But I did have my fingers and my toes crossed at the time.”

The other competition subject was a Home Town Cry, in which criers praise the qualities of the areas they represent.

“I have honed my home cry over the years and with so many great things to mention about the East Riding, I have confidence in its composition. I like to include local humour into my delivery and it always receives a chuckle when I remind folks they should visit the East Riding if only to enjoy life’s greatest grub, Yorkshire pudding – served cold with treacle.

“I will be looking forward to next year’s championship and shouting about the East Riding of Yorkshire, when if my current form holds, hopefully, it could be a hat trick of wins.

“In the meantime, as I go about my business in my ambassadorial role, I know that I am always striving to put the East Riding on the tourist map and make it a county for folks to be proud of.”