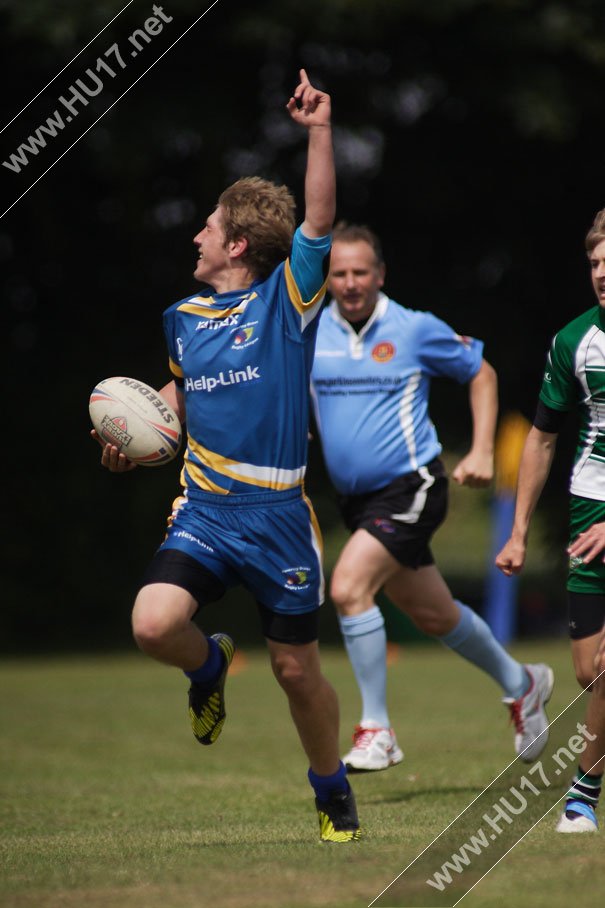 Another hot Sunday morning rugby started with a crunching tackle by Joe Wardill which knocked the ball out from the grasps of the Dockers player to be expertly picked up by James McGahey.

The resulting play saw Owen Harrison skilfully pass the ball out to Will Johnson at centre. He used all his strength to power over and opens the scoring for the Braves in the first minute. This set the tone for the rest of the game which saw a 9 a side match as Dockers where unable to field their full squad.

Before the visiting team had time to recoup, Beverley had started another attack. Harrison had picked out Wardill with a great pass and Wardill started his acceleration wide around the pitch passing the Dockers players and coming back inside to place the ball under the sticks for an excellent try. Harrison cleanly kicked the extra two points. Hull Dockers had a hard task ahead especially with the shortage of players but they took full advantage of a lapse in concentration by Beverley when they scored a great try out wide. They kicked well to take the game within 4 points.

This was just what Beverley needed though to turn on the pressure again and show why they are at the top of the league. Keenan Barker, who runs at players with such determination broke through the Dockers line and passed a stunning ball to the supporting Wardill who ran in another try under the sticks.

Harrison converted an easy kick. Moments later it was Jay Black who picked up a loose ball cleanly, dummied the defender and brilliantly placed the ball over the white wash out wide for a try. Dockers continued to battle well in the heat but Beverley dominated and passed the ball around the pitch expertly. The ball sailed through many hands from one side of the pitch to the other finishing with James Sherwin, who can never be caught when he finds the gap and he sped over the line to score.

Harrison was on target with a difficult kick. Dockers kicked off again and Keegan Bartlett caught the ball really well and off loaded to Callum Officer. He charged with his usual power and made excellent yards. It was another flowing move as Harry Inman released the ball well to winger Conor Egan who took his chance and accelerated beyond any chasing players to score another great try. Harrison converted another tricky kick.

With the half time whistle fast approaching it was Darren Benstead’s turn to shine as, with the usual smile on his face, charged at the Dockers line, broke through and showed his pace as he approached the line with his arm aloft for a stunning individual try. 38 – 6 at half time and the spectators could sense that there was more good rugby to come.

Connor Davies and Harry Bulleyment had some explosive runs in the middle to start the second half. Inman received the ball and powered towards the try line, stepping inside to barge through the line and leave himself a gap to charge over. The trusty kick of Harrison put the extra two points on the score board. Wardill ran hard at the advancing line and at the last minute released a brilliant ball to the supporting Inman who took his chance well and accelerated over to score. Harrison added the two. Newcomer Danny Naldrett was certainly up for the challenge with ferocious tackling and stunning drives.

It was Wardill’s turn to score as an excellent ball from Black caught Wardill running at speed at just the right moment that when he hit the line there was no stopping him and he completed his hat trick well. Bartlett expertly kicked the two. Bartlett then made a big tackle to prevent any of Dockers drives coming to fruition. Barker had another amazing run as he shook off any defenders who tackled him to power his way through for a great solo try. Beverley again got the ball to continue the onslaught. Bulleyment stepped over and through numerous defenders in the middle of the park shaking them aside.

The resulting play found the ball with skilful player Nathan Collinson; he cheekily side stepped his way over the line and scored. Dockers did not give up though and although exhausted continued to take the ball to the Braves almost breaking through but for a great cover tackle from Naldrett. Egan at full back did some great tackling to keep the Hull team away from the white wash. With only a few minutes left prop Officer charged up the middle of the park to give Beverley great yards and the resulting play saw Collinson add another great try to complete the match at 68 – 6.

The Braves showed good discipline throughout and Danny Naldrett picked up the Man of the Match for is brilliant all round contribution to the game.