Things didn’t quite go to plan for Team G&S Racing Kawasaki at Thruxton on Sunday as Tom Fisher was taken out of the Superstock 600 race and Dave Ferns pulled in to retire with a technical issue in the Superstock 1000 race. But it wasn’t all bad news for the Wyberton based team as Dominic Usher secured 19th place in the 1000cc event, improving on his Brands Hatch result last week.

The weather was against the team right from the start as the track was wet on Friday for free practice and qualifying took place in the rain on Saturday. Beverley rider Dominic Usher who works as an electrician/joiner completed his qualifying in 22nd place and began Sunday’s 16 lap race from a sixth row grid position. He remained down in 23rd place for the majority of the race but had begun to make a move forward on lap nine. He was running in 22nd place when three riders ahead crashed causing the race to be red flagged and a result declared after 10 laps giving Dominic a 19th place finish.

Dominic Usher #12 – We really didn’t have enough practice because of the weather; I only completed a handful of dry laps and this hindered my progress a bit. I couldn’t find enough top speed as we hadn’t got the gearing set up quite right and a bit more track time would have helped us. But it was the same for all of us and at least I finished the race within the top 20 so am moving forward.

Meanwhile in the Superstock 600 class Tom Fisher experienced a close qualifying session and ended up in 15th place for a fourth row start. The grid position does not reflect the effort he put in as the riders in positions three to 19 were covered by less than a second.

He got away to a good start in the race but was boxed in and pushed wide at the first corner. He managed to maintain his 15th place and was able to avoid the first corner crash that left a bike on fire in the middle of the track and the safety car out for the first five laps. Once the race was back underway Fisher, a printer from Nottingham began to make progress upfield. He overtook Tommy Dale for 14th and then Mark Wilkinson. He was in a large group of riders all contesting a top 10 result and looked promising to achieve this. But as he entered the Club chicane on tap 11 he was bumped from behind his race over.

Tom Fisher #45 said “Someone caught my back wheel and this caused me catch my hand under the clutch where it became trapped. I was heading for a wall and knew I was coming off so I jumped ship to try and save any damage to the bike. My hand was still trapped in the bike so I had to follow wherever it went and ended up in the airbags (see attached photos)The hand is a bit sore but other than that I am ok but it’s a shame as I was riding well and looking at a good result.”

Mark Fisher Team Manager said “once again the weather was against us but we were all in the same position so we just had to get on with it. All in all we did a good job, it’s just a shame it didn’t reflect in the results sheets.”

The team have a three week break before heading to Oulton Park for round three of the series which take place over the May Day Bank Holiday weekend, May 4-6. 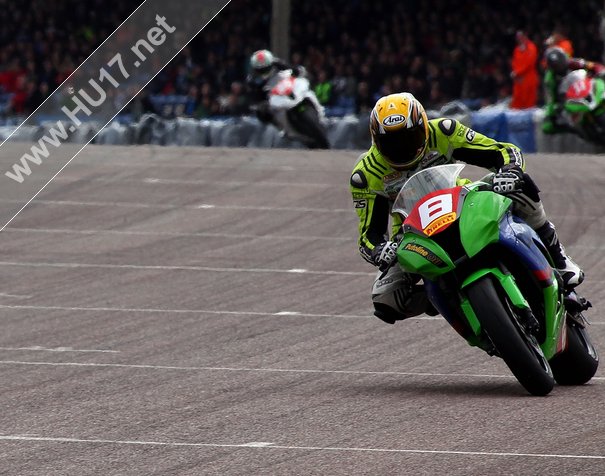 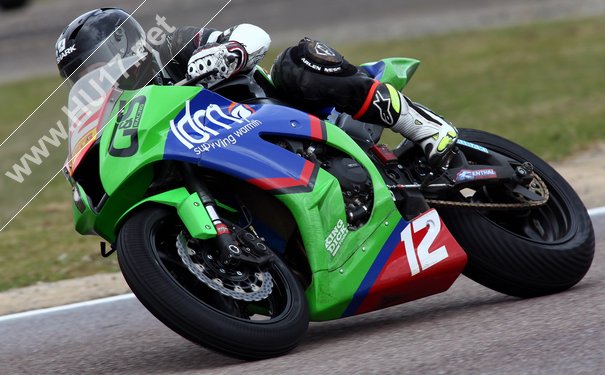 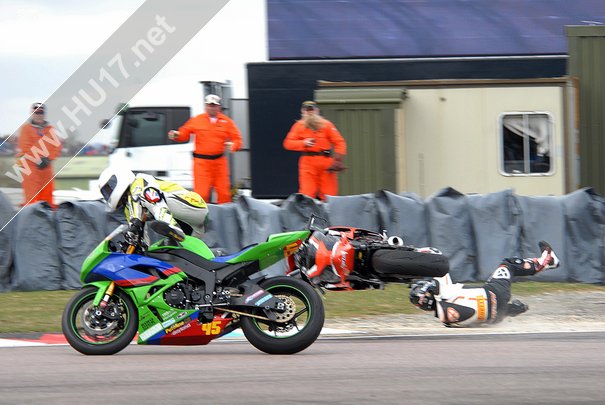 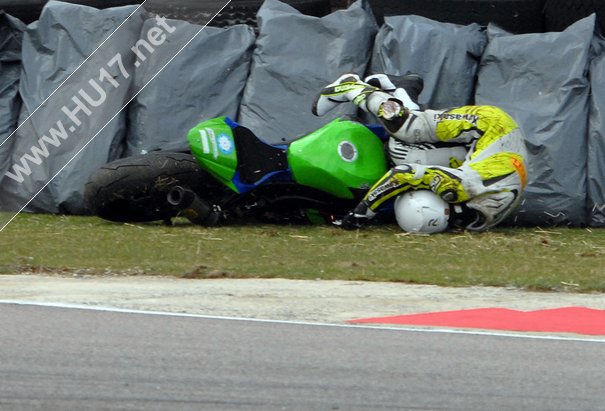