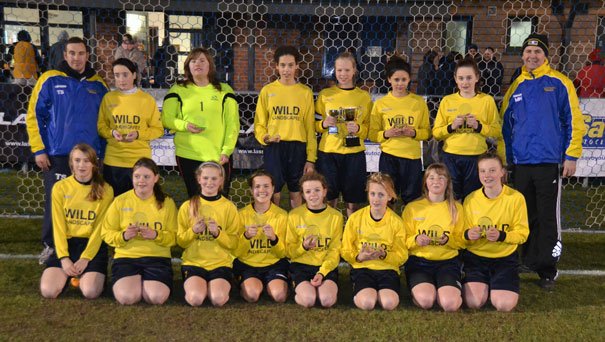 A Proud day for Mill Lane United with both their Girls u14 teams meeting in the Lassa Tyres Girls U14 Cup Final at Hull University.

In the 3 previous meetings in the league the Yellows had comfortably brushed a side the Blues and the challenge was to maintain their high standards and lift the trophy for the second successive year.

The games started on a sound surface ideal for passing football which both these teams are renowned for.Straight from the kick off the Blues made their intentions clear as they tackled and harried trying to knock the Yellows out of their stride in a breathtaking start to the game as both teams tried to gain that early advantage.The Yellows started to take control with some patient passing football and took the lead on 7 minutes when after good approach play by Morgan Nagee a pass found Striker Grace Fletcher wide on the right flank, quickly getting the ball under control Fletcher started  a run into the area before finishing in style at the near post .

The Yellows were now in complete control as they pinned their Club opponents in their own half and 2 more goals quickly followed both from Marie(Misty)Russell after a pinpoint corner from full back Charlotte Holliday and a defence splitting  through ball by Nagee .3 nil down after 15 minutes the Blues could have folded ,but this young team play with passion and desire and dug deep as they tried to get the goal that would get them back into the game.The Yellows defence of Charlotte Holliday,Courtney McConville ,Amy Radford and Lucy Crockett stood firm and despite a Valiant effort the Blues struggled to get a clear chance on goal.As on many occasions during the season the Yellows withstood the pressure and hit their hard working opponents with a killer blow 5 minutes from half time.

A fine ball out of defence from Amy Radford found captain Emma Johnson in space over half way quickly finding  the supporting Emma Smith who finished in style from the edge of the area to give Kimberley Mason no chance in the Blues goal.The whistle blew for half time  with the Yellows leading 4 nil.The second half started with the Blues knowing they had to score next to get back into the games and lead by captain Olivia Nassau,Abbie Longley and Natalie Bell they tried hard to find the opening for hardworking striker Demi Jo Watson .

The game was end to end as the midfields fought for control ,but the Yellows driven on by the midfield of Jess Pashby ,Tonya Storr ,Smith and Johnson created the better chances and the Blues were thankful for 3 tremendous point blank saves from goal keeper Kimberley Mason to keep them in the game.

Finally the Yellows converted one of their chances from an unexpected source when impressive defender Courtney McConville hit one of her specials from 25yards  passed an unsighted keeper to give the Yellows a 5 nil lead after 55 minutes.With Hard working Nagee and the lightning pace of Russell reintroduced the Blues defence with Skie Wyatt and Nassau outstanding were under extreme pressure as they started to tire.

The sixth and final goal was Mill Lane Yellows at their best a throw out from goal keeper Leah Shalgosky finding full back Charlotte Holliday in acres of space ,a quick through ball released midfielder Morgan Nagee before a killer 30yard pass found a rampaging Russell racing into the area and finishing in style after a  glorious 80 yard move from their own area to complete her hat-trick.

The final whistle blew the Yellows victorious over the Blues for the fourth time this season as they retained the U14 trophy for the second successive year, but the Blues can be proud of their performance full of guts and determination and can  hope for a different result next year when the Yellows move up to the U16s competition. For the Yellows, a superb first half performance which put the game to bed and secured their first piece of silverware for the 2012/13 season.