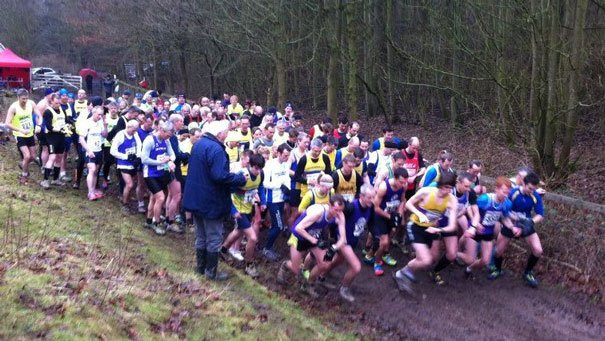 Conditions were cold and very muddy for the penultimate race in the East Yorkshire Cross-Country League which took place at Welton last Sunday.

The scenic 5.3 mile undulating route started and finished in Welton Dale and took runners through woodland and round field edges.

James Pearson finished first for Beverley. He was sixth overall in 34:25. The next five Beverley men to cross the line also scored points for their team. They were Lewis Holloway, Darren Rodmell, Luke Davison, Paul Clarke and Andy Tate.

Beverley’s men’s team finished in second place behind City of Hull who continue to dominate the league. There were five City of Hull runners in the top ten and they now have an unassailable lead over second placed Beverley.

Carla Stansfield was the first lady to finish but due to a hiccup in her registration with England Athletics she was not eligible to run for Beverley and Helen Cross of Pocklington Runners was awarded the points instead. It was a disappointment for Stansfield who finished in 16th place overall in an impressive 36:37. It is hoped that her registration will be confirmed before the final race in the series so that she can boost Beverley ladies’ score and position in the league.

The ladies scoring points for Beverley at Welton were Sam Allen, Laura Egan and Jayne Dale. They finished in fourth place, only one point behind Pocklington, and the team is also fourth in the league overall.

There were 133 finishers and the race was won by Jack Robertson of Scarborough AC in 31:56. The ladies competition was won by Helen Cross of Pocklington Runners in 37:24.

The final race in the series takes place at Sewerby on Sunday 3 March.