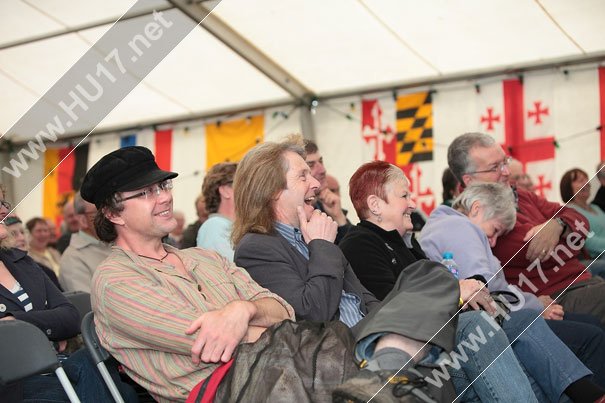 Festival brings top Comedy acts to the Racecourse in June – along with leading music stars!

This year’s Beverley Festival has not only secured top names from the world of music, but it has now confirmed some leading comedy acts for its weekend programme in June.

John Shuttleworth will be making his first visit to the festival and according to John – he is really looking forward to visiting the town and taking a jog around its racecourse – not that he bets of course! He will be appearing in his own concert on the Saturday night (22nd June) of the festival. With his quiet manner, slightly nerdish tendencies and his musical talents usually expressed through his Yamaha PSS portable keyboard, and including “Pigeons in Flight” – a song which he attempted to have selected for the Eurovision Song Contest, he is guaranteed to be a perfect act for the festival.

Friday night (21st ) starts off the festival comedy with Patrick Monahan , and Irish- Iranian stand-up comedian from Teesside –“ a one man ethnic melting pot, a star in the making” Daily Telegraph, with a warm, friendly , lively story telling style. He is a comedy festival regular and has performed all around the UK and across the globe, as well as being in great demand for TV shows. He engages his audience with charming banter about local affairs and universal issues, as well as combining animated story telling style that draws on his own experiences.

With a top line –up of music including a first rate programme of Americana music with leading country music star Gretchen Peters (USA) and singer songwriter Steve Forbert (USA); plus Grammy nominees Eric Brace and Peter Cooper (USA) and Will Kaufman (USA) with his one man shows about Woody Guthrie . Finally the festival favourites, The Whiskey Dogs with their special brand of Old-time music will be back leading some Americana music sessions and lots more.

All this plus a full programme of music including headliners the legendary Scottish duo The Proclaimers (Friday 21st), Show of Hands with Miranda Sykes (Saturday 22nd) and Oysterband (Sunday 23rd) who last appeared at the festival’s 21st anniversary.

A full programme of music for the younger audiences will be presented by the festival’s own Area2 Youth Programme – organised, run by and performed by young artists and volunteers. For children and families, an extended programme of activities will be on offer this year with the bonus of having extra space and facilities available at the new site – The Beverley Racecourse.

The full programme of music and film, comedy and literature events looks set to be a major hit with all age groups and interests.