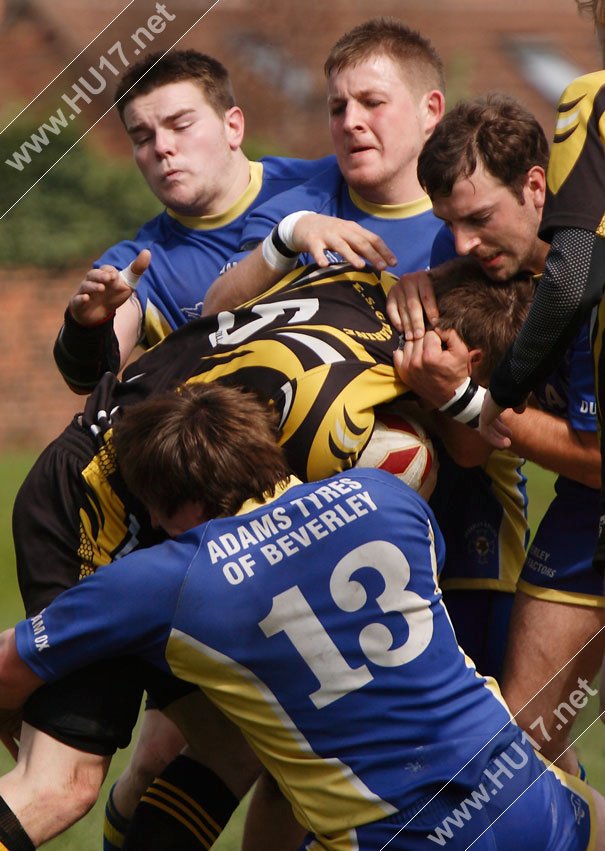 This was a pleasing performance from the blue and golds last Saturday on their travels. They trailed 8-6 at the interval but produced a dominant second half display to run out convincing winners.

The opening 15 minutes saw both sides cancel each other out. However, the deadlock was broken when a quality initial break from Ben Calvert saw the position set up for the ball to be shipped left, and Ryan Watkin waltzed through the Fenners defence to score and convert his own try.

Things were looking good for the visitor, but a few handling errors allowed their opponents too much possession and territory. The home side took full advantage to score two unconverted tries to lead 8-6 at the break.

Coach Guy Adams sent his side fired up for the second half knowing they should never have really been behind. Seven minutes into the half after a few sets on the Fenners line, Ryan Wakins astute pass sent Lee Stevens charging over for Watkin to convert. The pack certainly were good value with Lee Stevens, Gareth Lane, Mark Nicholson and Steve Davidson all punching holes in the hosts’ defence.

Midway through the half, after more pressure, man of the match Mike Cooper sent a well weighted kick to the corner for Lee Atkinson to pounce and score an unconverted try wide out.

The home side hit back with a try five minutes later, but the visitors were determined not to let this one slip. Another raid on the Fenners twenty metre zone saw a clever switch of play to the blind side by Ryan Watkin sent Steve Davidson crashing across the line with the conversion going over with ten minutes to go this looked to be the game breaker.

The visitors threw caution to the wind in the closing minutes and just when they looked to be danger Lee Falcus intercepted to race 70 metres to complete the afternoons scoring.

Coach Guy Adams seems to be finding out player’s best positions now with the Ryan Watkin and Mike Cooper combination at half back now paying dividends behind a dominant pack.

This game marks the last game before the Christmas break with the next game being January 5th. The half way point sees the blue and golds at last seeing some improvements in their fortunes. They, however, remain on the lookout to strengthen.

Anyone wishing to play for Beverley ARLC or any of the youth sides from under 8s to under 15s can enquire to Guy Adams on 07585046099. Guy has now established very good links with the ‘Braves’ junior section.