These two sides produced an entertaining encounter at the Beverley Leisure Centre last Saturday which but for the final ten minutes looked as if the result could have gone either way. It was probably the blue and gold’s best performance of the season against a side still unbeaten this season.

The visitors enjoyed several spells of quality possession close to the Beverley line, and it took some heroic defence to hold them out especially with signings to Steve Connolly, Lee Falcus and Tim Niccollini, which meant they had spells down to 12 men in the first half and 11 men for the closing minutes.

Coach Guy Adams decided to switch positions around a little for this game. Mike Cooper was switched from the centre to the standoff half position and Steve Davidson was switched to loose forward.

This allowed a debut to be handed to Vinnie Collingwood in the centre.

The opening 25 minutes was a war of attrition with both sides going toe to toe. The sin binning of Steve Connolly proved crucial in the 25th minute as the visitor exploited their numerical advantage to help themselves to a 10-0 lead. Gavin Proctor replied for the hosts 5 minutes before the break with a cheeky dart from the dummy half position to go over beside the posts for Watkin to convert. However, the visitors took advantage of a handling error and score from the resultant set of six right on the stroke of half time and lead 16-6.

This failed to dent the spirits of the hosts who came out for the second half more pumped up than ever. Forwards Gareth Lane, Dan Clarke and

Adam Norton all stood out when taking the ball up against a very well organised Cottingham defence. Ten minutes into the second half after some quality sets of six the home side got the try they deserved. Ben Calvert ran a neat angle from an inside pass from Ryan Watkin to go over behind the posts for Watkin to convert. With the scent of victory in their nostrils the hosts continued to press.

Their best chance followed shortly when interception by Lee Falcus saw him race 60 metres only to be pulled up short. He managed to play the ball quickly, but the visitors were all offside at the play the ball with a penalty awarded, which only served to slow the game down and allow Cottingham to re-organise in defence. It proved to be a chance gone begging.

The Cottingham outfit coached by former Beverley’s player Dave Cooper soaked up the pressure and took advantage of spells in the sinbin for Falcus and Niccolini, which reduced them to 11 men for the closing minutes. A try was scored out wide 8 minutes from time, which ensured the visitors unbeaten record remained intact.

Ben Calvert took the man of the match award in a very close vote. In fact, all 17 players who put on a shirt deserved a pat on the back.
This Saturday Beverley are away to Fenners kicking off at 2pm at Marfleet Lane. 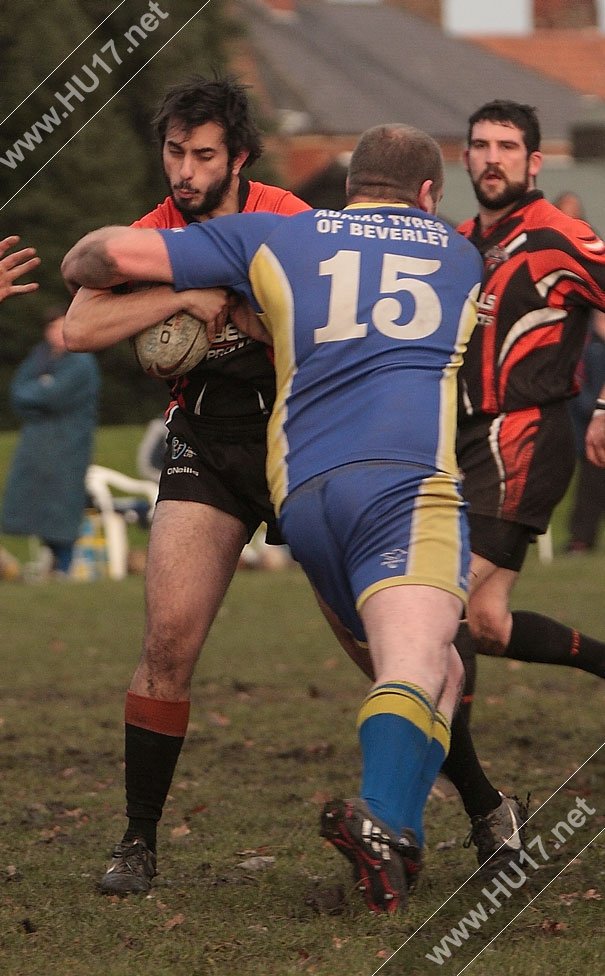