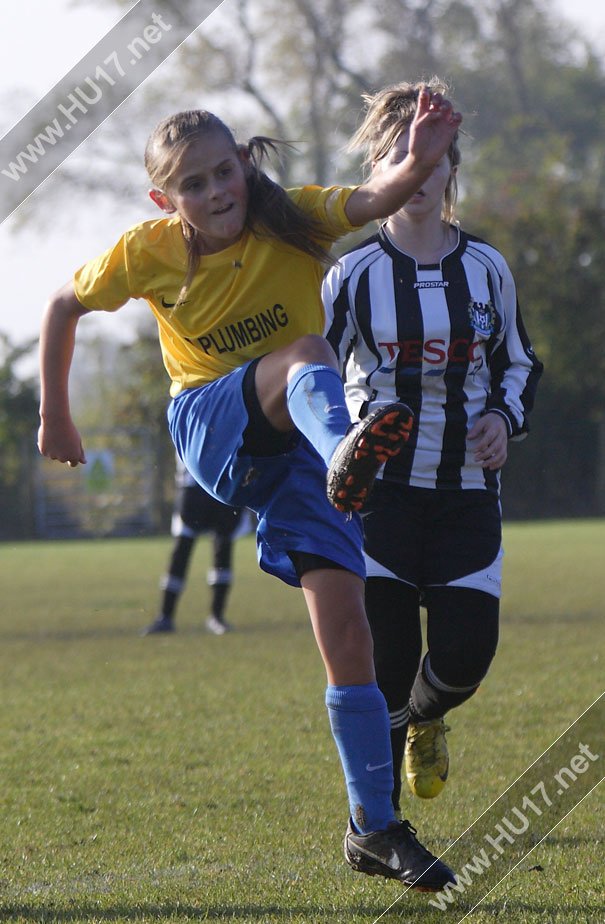 On a day when only two matches were played, both on all-weather pitches, both sets of players could have been excused if they had not committed fully to the match in cold and difficult circumstances. However, in a breathless display, both sides gave 110% in a superb advertisement of girl’s football.

United lined up with Jessica Wright in goal, protected by a back four of Fenella Scutt, Madeleine Wells, Skie Wyatt and Captain Olivia Nassau. The midfield powerhouses of Abbie Longley and Natalie Bell were joined on the flanks by Amy Dodds and Cordelia Cavill, leaving ace striker Millie Sharp alongside the silky skills of Demi Watson in attack.

The first half saw Malet Lambert fly out of the blocks forcing the visitors to defend deep inside their own half and after a succession of corners their pressure finally told as Hannah Frost smashed the ball home after a corner wasn’t cleared.

The goal sparked Mill Lane into life, and they started to ask questions of the home side’s defence. With the match been played at a breathless pace and fluctuating from end to end a goal always looked likely and luckily for Mill Lane, good work from Demi Watson and Millie Sharp saw Natalie Bell scramble the ball over the line for a deserved if somewhat fortuitous equaliser. With both defences on top the half finished with the sides level with a goal apiece.

The second half saw the visitors make a terrible start and they were duly punished when Malet stole the ball in midfield and broke at speed into the penalty area with Emily Drewery finishing with aplomb to give her side the lead for the second time. Once more, though the goal sparked the visitors into life and for the remaining thirty minutes in the half, Jessica Wright was a virtual spectator as Mill Lane United dominated possession and started to create chances.

However, Claydia Elliott in the Malet goal was in great form saving everything the visitors could throw at her, and on the one occasion, Millie Sharp did beat her, the woodwork came to the rescue. With the minutes ticking away it looked like Malet might hold on for victory. However, from a goal kick Demi Watson intercepted the ball and drove in to the penalty area and in the process holding off the defender, before smashing the ball past Claydia into the net to send the game into extra time.

The first period of extra time was a scrappy affair as both teams began to feel the effects of the high tempo of the previous two halves, however, Mill Lane United continued to create the clearer openings and Millie Sharp looked to have given her side the lead, only for her superbly struck shot from outside the area to fly inches over the bar, leaving the sides still level at the end of the first period.

The second period of extra time once more saw both sides fighting for every ball and the match looked destined for penalties until with only two minutes left, Demi Watson once more intercepted a goal kick and on the half volley hit a stunning strike from outside the area which flew in to the back of the net to give Mill Lane the victory and a place in the Lassa Tyres Final.

Overall, the match was played in a fantastic spirit with both sets of girls giving their all; Parent’s player of the match for Mill Lane was awarded to Abbie Longley while the manager’s award went to Demi Watson.