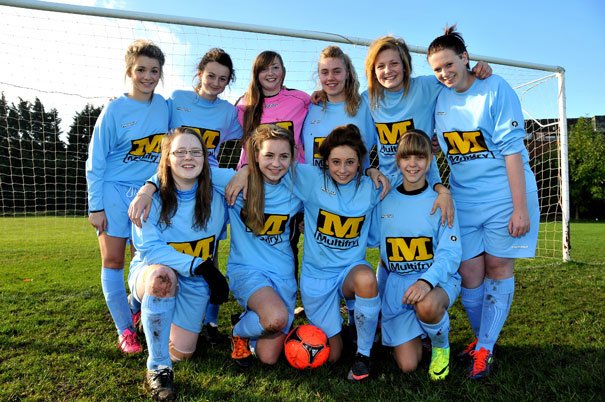 Hornsea Sporting FC were the visitors to the Walkington home of Mill Lane United’s under 16 girls in a Eat Riding Girls Football League encounter.

This was Mill Lane United’s first home game of the season, and the team were under no illusions about the need to take their first league points, despite knowing that they could only field nine players.

The away team arrived with twelve players, but made a generous gesture in offering to field only ten in order to even things up. In offering to start with a weakened team they certainly lived up to their sporting FC name, and they should be applauded for it.

After the minutes silence the match got underway.

It was a scrappy match to begin with, with each team weighing up the strengths of the other, and both teams getting to grips with a heavy pitch.

The stalemate was broken when Mill Lane opened the scoring, and then Hornsea struck back with two goals to finish the half in the lead.

From the re-start both teams picked up the pace and the match became more open, with plenty of positive attacking play and some crunching but fair defensive tackling. The match remained finely balanced, but it was Mill Lane that eventually took the points with a strong second half performance, where Keely Forward took her match tally to four goals.

Although both teams enjoyed spells of superiority, in a competitive game where every player gave their all, ultimately the difference came down to the excellent understanding between Mill Lane’s Courtney Fee and Keely Forward, who were able to penetrate an otherwise well organised Hornsea defence.

The final score was 4 goals to 3 in favour of Mill Lane.

The away team will feel disappointed to leave with no points from what was a very close match, but they can be satisfied that they played their part well, both before and during the game.

The Mill Lane United player of the match went to Leonie Robertson who, despite carrying an injury, put in a gritty performance in midfield and later in defence. A performance that typified the determination and commitment that the players have collectively shown, in a season when they have yet to start a game with a full team.