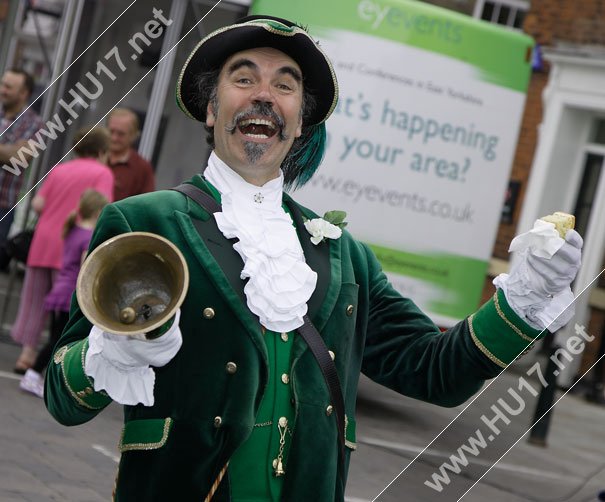 In addition to the region’s recent successful Olympic and Paralympic Flame celebrations, in which the county crier Michael Wood was involved, the East Riding can now also claim to have both the overall Best Town Crier and Best Dressed Town Crier in Britain.

During the bank holiday weekend, Michael took part in the Diamond Jubilee British Town Crier’s Championships in Hebden Bridge, West Yorkshire. For the first round, competitors gave their ‘home’ cry in which they extolled the virtues of their place of representation. Some criers only have a town or a city; Michael has a whole riding to shout about – but he is loud.

In his cry he mentions how “Yorkshire’s East Riding is the chosen county of artist David Hockney, where one can walk our wonderful Wolds or hike our heritage coastline to discover rustic villages, bustling market towns and sexy seaside resorts.”

For the second round, competitors gave a cry about a memorable event in the last sixty years. Michael was lucky enough to win tickets as an audience member at the recent Diamond Jubilee Picnic and Concert at Buckingham Palace. His cry covered the highlights of his day in which he mentioned he was even luckier to brush shoulders with royalty. He even met Strictly Come Dancing’s Russell Grant, who informed Michael he is very fond of the East Riding of Yorkshire having written about the county in a book looking at Britain’s original county names.

Hebden Bridge had recently made the headlines because of flooding in the town. The competition was held to show that it was open for business as usual. Michael wanted to attend to lend his support, and his presence was further rewarded by also winning the prize of Best Dressed Crier.

Councillor Stephen Parnaby OBE, leader of East Riding of Yorkshire Council, said: “Michael, with his unique skills, has for the last fifteen year helped to raise the county’s profile. He is always a valuable and popular addition to any event, civic and social.”

Michael said: “I greatly value the appointment, and I love the variety of work that it brings. However, it is meeting people that I mostly enjoy, to whom I guess by now you could say I have become a face that rings a bell.”

Of the title given to the winner, Diamond Jubilee British Town Crier Champion, Michael said: “Who knows when the next Diamond Jubilee celebrating a monarch’s reign of sixty years will take place – maybe never? This would mean the title could be mine forever, which is a heck of thought. Oyez it is.”