What feels like a life time ago now but was, in fact, on only few days ago I took a trip to the Beverley Leisure Centre where the Beverley Folk Festival was being held.

On my arrival, I wished instantly I had put some boots on as it became clear that the poor weather had caused the ground to become a little muddy, I should have known better given the amount of games I have covered on those fields that when it’s wet, it’s muddy.

Everyone else seemed to be coping just fine, except me, taking the Welly Wash in their stride and generally getting on with things.

The first up on my list of things to do was find something to eat, if there is one thing festivals are good for it is the selection of foods they bring.

As I made my move disaster struck, side stepping mud, and I went right into a puddle, not a little puddle it was more like a mini lake, and I got a booty.

After fumbling around a bit I found a stand that served up a nice sausage sandwich and armed with that I set to go and discover what this year’s event had to offer, apart from the mud.

In all I saw bits of three acts. The first was in the tent nearest to Hodgsons Pub. It was a lady signing she was very good. Making my way back through the festival I stopped off at the family area where I found members of the Sport & Play team entertaining the children.

One of the chaps from Sport & Play was doing some form of boxercise, basically he became a punch bag for the children, which, frankly, was quite amusing. There were plenty of other activities going and despite the weather they were all having a great time.

Out of there I headed through a tent that had lots of stands in it, there was a man who fixed instruments working away and some colourfully dressed people selling stuff. One thing that stood out was some strange dolls a couple of ladies were selling.

As I left this tent, I had a chance encounter with the Green Team who under the command of Kerrin Tatman quickly renamed themselves to the Ecco Warriors. Kerrin of course is better known locally for his theatre company, NO SOUP!

Into the next tent and before I could get my camera out the act on the stage, a comedy, musical, stand up turned on me!

Luckily, they posed for a picture, I then made a swift getaway, so I could get the picture of the crowd, these guys were really funny but after the nature of my entry, I just needed to leave there.

The final act I saw was in the main the hall later that afternoon. They were a band made up of five people fronted by two sisters. They too were very good. 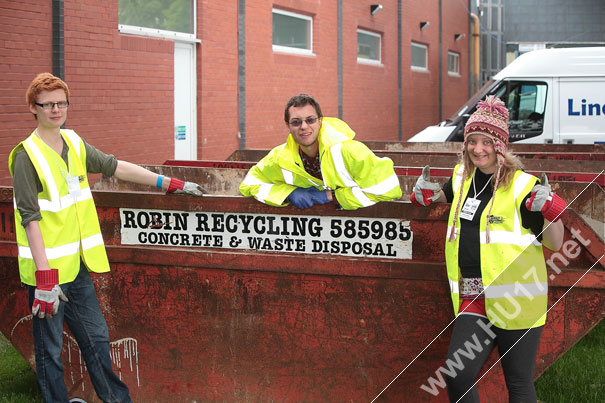