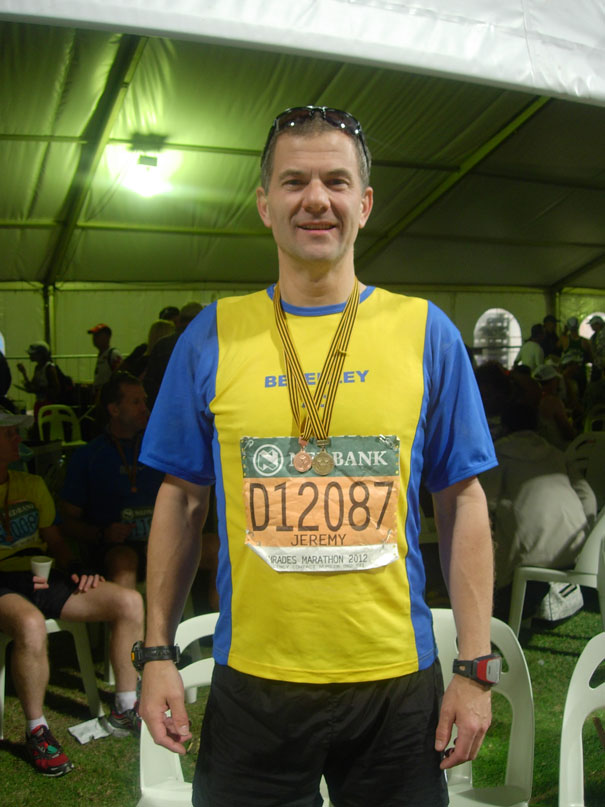 A gruelling 56-mile race, it was run for the first time in 1921 to commemorate the South Africans who fell in the Great War. The race is now an annual event which takes place in hilly country between Pietermaritzburg and Durban. The start alternates between the two cities and this year participants started in Pietermaritzburg to follow the downhill course.

Having finished the uphill race in 11:48:12 last year, Beesley hoped to finish in less than 10 hours this time but he found that the downhill route is just as demanding as the uphill run. He said: “The first half beats you up and the second half turns the legs to mincemeat!”

Although the variation in height between the start in Pietermaritzburg and the half-way point is only 170m, from the half-way point to the finish in Durban the variation is 650m. This variation is dramatic and includes a long steep downhill section of 22km where the route drops 500m. This is followed by a steep climb uphill. The marathon website warns runners that “foolhardy exuberance here will be paid for many times over on the final run into Durban.”

After the first half of the race Beesley realised that he had not been taking in enough food and drink and had a difficult 20km while rectifying the situation. He also had calf and knee problems from about 15km and the pain increased progressively during the rest of the race. He said: “Most of the second half was done nursing my legs and expecting not to finish. It was only when I went over the 7km to go mat that I thought I’d do it.” With amazing determination he crossed the line in 11:43:34 almost 5 minutes faster than last year. He was rewarded with two medals as he had run the race in consecutive years.

During the race Beesley’s GPS recorded a total climb of 2692m and a total descent of 3332m. Although pleased to have finished such a challenging event he was not satisfied with his performance and intends to return next year to do himself justice.

The race was won by South African Ludwick Mamabolo in an amazing time of 5:31:03.