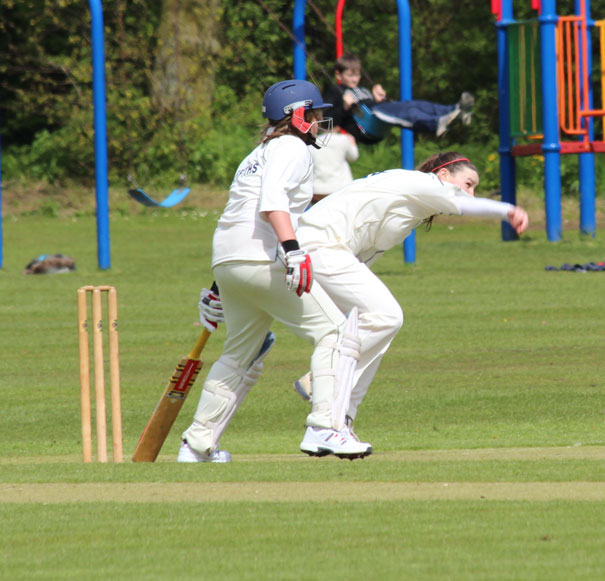 Beverley Travelled to Treeton, near Sheffield, with a good batting side but a reduced bowling attack due to other commitments by the players.

The sky was overcast, and the pitch damp due to weather conditions that everyone has been suffering from lately.

Beverley won the toss and decided to bat; Sarah McDowell and Beth Smith set off at a slow pace due to the accurate bowling of Liz Lazenby and Halle Butts taking 4 maidens between them in the first 8 overs.

Sarah and Beth persevered protecting their wicket until the first change over and took the score to 44 when Beth was bowled by Elle Bailey for 18 in the 19th over.

Laura Wilson came to the crease where she, and Sarah took the score to 67 hitting the ball around the ground but like Sarah getting the ball to the boundary was difficult when the pitch was damp, Laura was eventually brilliantly caught by Elle Bailey off the bowling of Molly Whittaker for 23.

Amy Halloran came in next to accompany Sarah, and the partnership was going great until a misunderstanding at one end saw Sarah back to the pavilion, run-out for a heroic 33. Amy was joined by Charlie Cooper, and the pair shared 29 when Amy was bowled for 19.

Charlie held her ground until the last over where she was caught and bowled by one the returning openers, Halle Butts. Treeton had good and bad spells with the ball and was well backed up with the fielding, although there were a few catches dropped, a crucial one to get Beth Smith out early. Beverley had a slow start at one an over but eventually ended with an over rate of 3.37 for Treeton to attack.

Amy Halloran was Beverley’s opening bowler with Beth Smith and within 5 balls had Laura Payling back in the pavilion having played on. Treeton responded with Halle Butts and Nicky Walters pushing the score on and after 8 overs were well in front of the run rate (4.1).

At the first change Nicola Knapton came to partner Beth Smith and slowed everything down with speed and accuracy, both taking one wicket for 8 runs. Keeper Sarah McDowell made it difficult for the batters as she was standing up to the quick bowlers giving them no room and crowding them out, her quick reactions saved a good many runs and made the batters think twice about running.

With the score on 48 Beverley brought on their secret weapon, Louise Todd, her slow off breaks taking the wickets of Lazenby (4), Bailey (1), Whittaker (4), Scott (5) and Walters (20), giving her 5 for 19 and the woman of the match award. She was teamed up by the youngest player in the side, Ailish Ward (14), who had 5 overs for 9 runs a fantastic record.

Fielding was top notch by all the players with good running and throwing to cut down the runs. Treeton’s Nicky Walters was the only one to give any resistance top scoring with 20. Beverley’s next match is in Lancashire at Vernon Carus against good few Lancashire players.