Beverley Town Cricket Club’s third team got back to winning ways versus Cottingham in a rolla-coaster of a game.

Ask to bat first on a glorious day at the Norwood Recreation Ground Beverley made any encouraging start by reach 79 without loss in the 19 th over, Cottingham then introduced spin into the attack at both ends Ali Brumfield(38) and JamesBrocks (38) both fell quickly along with 3 other wickets to leave the ‘Buccs’ in trouble at 96-5 with 20 overs to go.

Tim Fordon and James Emery (18) started to rebuild but found it difficult to score as quick as they usually do with no pace on the ball from Graham furlong who finished with figures of 5-35 . Rob Fish(11) came to the crease to push the score to 154-8 off their allotted 48 overs. Fordon ending unbeaten on 33.

In reply Beverley new quick wickets were needed and the new ball would be important Skipper Kieran O’Brian and Guy Brumfield provided the start needed claiming 3 early wickets with some excellent swing bowling. The Beverley continued to keep it tight, but Cottinham went from 11-3 to 89-4 with at the half way stage and were firmly in the driving seat.

O’Brian knew a change was needed and introduced Brumfield back into the attack and he delivered with 3 wickets in two overs leaving the visitors reeling on 90-7 O’Brian himself came back in to attack and picked up another wicket the openers continued to bowl out their overs but could pick up the final 2 wickets.

Brumfeild finished with the excellent figures of 12 0vers 4-30 and O’Brian 12 overs 3-26 in what was 2 good stints. Youngster Kez Thompson picked up a wicket in his first over back to leave Cottingham 9 down with the score on 120 Nick Robinson was steaming in at the other end but was unable to wrap the game up with a simple caught and bowled chance.

Town saw the game edging away from them as the last pairing put on 27 leaving them needing 8 to win Thompson then clean bowled Cottinghams number 10 with a quick delivery ending with figures of 2-40 leaving Beverley to pick up the full 20 points. It was an excellent game enjoyed by all involved and a great advert for the Alliance premier league. 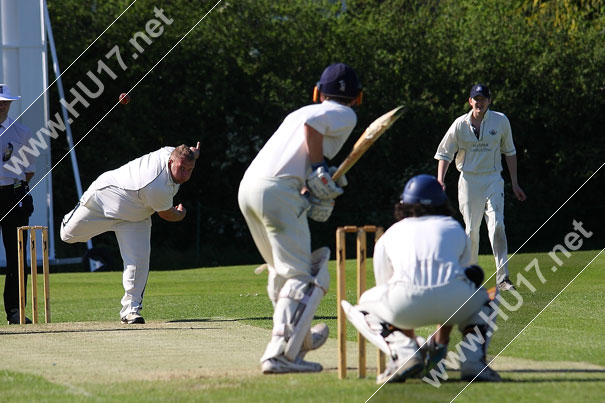