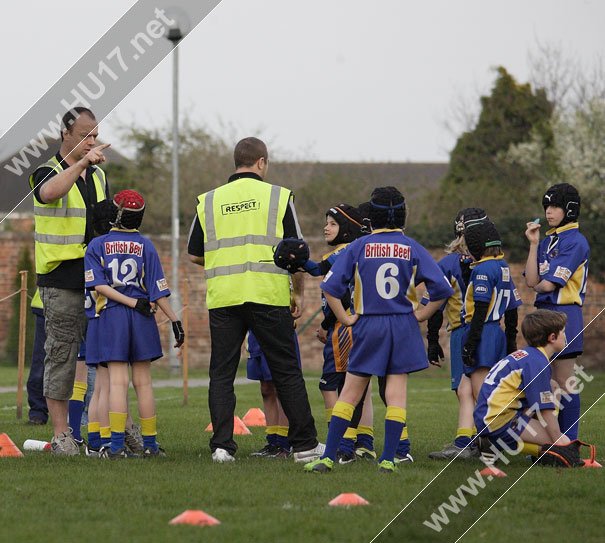 Match reports from the Beverley Braves Under 9s and Under 10s. Both sides faced tricky away fixtures, the U9s may have been beaten but the U10s picked up their second win of the season with a fine performance against Hull Wyke.

Anyone who knows anything about rugby league and how it should be played, should not be fooled by this score line. Yes Beverley were beaten and full credit must go to a well coached Myton Warriors who scored some wonderful individual tries and fully deserved the win but the Braves played some excellent rugby on the night, throwing the ball around with great skill for their age and always looking to entertain.

Up front Alex Nuttall and Reece Wallan charged forward again and again giving the opposition all sorts of trouble with Alex getting a try for his efforts late on.

Bryan Usher sprayed the ball about from acting half with growing confidence to the likes of Tom Nuttall, Shamus Blades and Ellis Gaden who all ran the ball very well on the night linking up with Adam Greenwood and Charlie Gay.

In defence Ellis Gaden and Reece Wallan put in some enormous hits to inspire their teammates and all the lads deserve a pat on the back for the way they got stuck in to the much bigger opposition.

Matthew Shirley deserved praise in only his second run out as he was constantly looking for work and that commitment does not go unnoticed.

Tom Nuttall was awarded the man of the match trophy after an all action display with the ball in hand whilst Charlie Gay earned the top tackler trophy through his sheer work rate.

The Beverley Braves under tens picked up their second win of the season and their first away from home with a 6-22 victory over Hull Wyke.

This victory was built on well organised attack and defence with hard work in training paying off. Tom Marr and Marcus Walker called the shots in attack ensuring the team took the right options in attack and both forcing the Wyke defenders behind their own line with some good kicks.
Their organisation was complemented by the hard work of man of the match Harry Newton with fearless tackling and gaining a huge amount of yards with his scoots from acting half-back.

With the foundations laid by these three the rest of the team were able to put in a performance that they can all be proud of. The Braves were first to score with a Ryan Deane tackle dislodging the ball from the Wyke players grasp close to his own line. From the resulting possession Henry Hughes, who caused all sorts of problems with his strong running, charged over to score, with Deane’s conversion it was 0-6. Strong defence from Will Sanford and Oliver Loney helped ensure the score remained the same until half-time despite a lot of Wyke pressure.

Beverley were the first to score in the second half when William Kirkup cheekily crashed over from acting half back to score an unconverted try. Wyke soon responded and with the score at 6-10 the game was in the balance. Ethan Rowbotham capped a fine display in defence by scooting away down the right wing to score but with the conversion missed the Braves lead was still only eight points.

Ethan Oshin continues to improve in his first season and he put in some good tackles and strong runs and with Tom Newton solid in defence on the right wing before moving to full back later in the game the strong team performance was underlined. It was however William Wallis who had put in a huge amount of tackles on the night who popped up at the right place at the right time to take Deane’s offload to crash over and make the game safe. Rowbotham’s conversion was the icing on the cake.