Beverley Braves under 10’s got their new season under way against last season’s most consistent side East Hull at the Beverley Leisure Centre.

Adapting well to under 10 rules that bring them much closer to the full game with scrums, kicking and square markers now allowed, both teams contributed to an entertaining game of rugby league. It was however the kicking game close to the line from East Hull that turned out to be the difference between the two sides.

Defensively the Braves stuck to their task well with Ethan Rowbotham revelling in the square marker role topping the tackle count, closely followed by George Lees and scrum half Lewis Egan who continues to put in a work rate that belies his smaller stature, he is the Rob Burrow of the team. It was this defence that restricted East’s to just two converted tries in the first half, twice having players tackled in to touch with Ryan Deane heavily involved both times.

0-12 at half-time and the Braves were still in the game but despite strong running from forwards Oliver Loney and Will Sanford it was East Hull who would score again and at eighteen points down Beverley now had an uphill task. They responded well however with William Wallis getting his first try of the season from acting half-back, which he then converted to bring it back to 6-18.

The match was still in the balance and with Tom Marr dictating play at stand off and Marcus Walker getting some decent down field kicks away despite being put under great pressure from the East Hull defence they went looking for the next score. William Kirkup was eventually hauled down after a strong run coming in side off his wing and Dylan English looking dangerous with his weaving runs, but it was Easts who scored the next and decisive try to make it 6-24.

Not to be outdone George burst on to a pass straight from the re-start, broke the defence to race forty metres to score a try much to the delight of his team mates and the large group of parents and friends who had come along on such a fine evening to watch the game. Tom Marr converted and it was now 12-24, a very respectable score line against an East Hull side with a lot of natural ability.

With Tom Newton and Tom Cohen on the field and helping to bolster the defence and attack it was a superb cross field kick on the last tackle that any team would have found difficult to defend that gave East Hull the final try of the game. It was unconverted leaving the score at 12- 28. The

Braves still had their heads up and Joseph Dennis was still full of running and he hit the gap, then weaved to the side before being brought down close to the line just before the final whistle. All the boys and girls involved on both sides can be proud of their effort, adapting to the new rules well, George Lees won Beverley’s man of the match award for a great all round display of defence and attack. 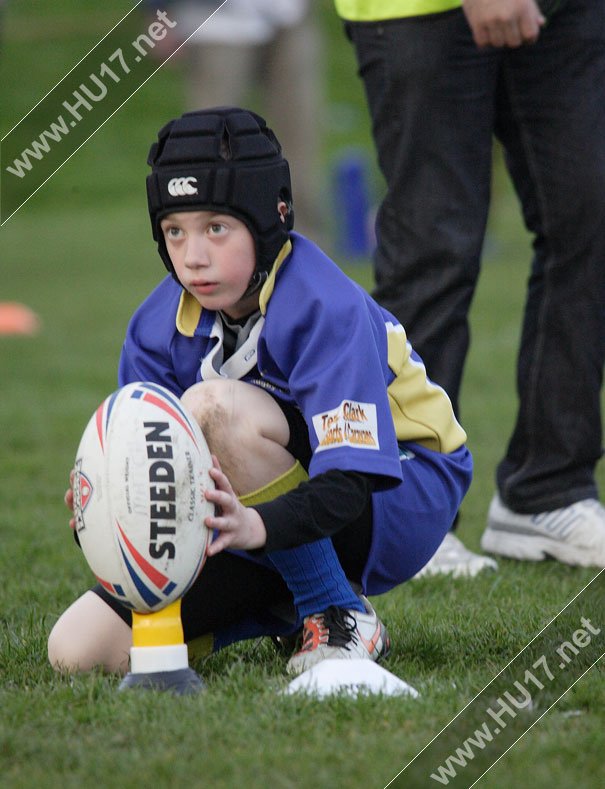