The Beverley Braves needed to maintain their current form from previous matches against a strong looking Wyke side and it was the visitors who had the early pressure. They would have scored at try if it was not for the ball being slippery in the early mist and falling beyond the grasps of the Wyke winger. Beverley had to defend and some superb tackles came in from Conor Egan and Tom Wood to hold the attacking force coming towards them.

Wyke definitely looked more up for the game and played with endeavour as they continued to force themselves into the Beverley half. The Braves failed in the first 15 minutes to keep the ball and put immense pressure on themselves. There were glimmers of hope though as Beverley started to gain momentum, Harry Bell played well at full back and the game started to even out. Finally Beverley got back to their old self and started passing the ball around.

The ball went through hands across the width of the pitch and hard working Harry Gray released James Sherwin to score a stunning team try and break the dead lock. It was now Beverley’s day as they looked organised and in control. James McGahey scored an opportunist try as he hit the player on his own line that hard that he spilled the ball and McGahey pounced on the loose ball for a superb try. Joe Wardill picked up the ball in his own half and pulled away from the chasing men as he ran down the wing to score under the sticks to bring the score at half time 16 – 0.

The second half picked up where the last half had finished with the Braves in control. Darren Benstead was outstanding in the middle with massive hits again and again. Harvey Lazenby had a big tough game battling hard throughout and Callum Officer was his usual powerful force with tackle after tackle. Sherwin added to his tally with another brilliant try using his amazing pace.

Dylan Clifford got the ball and put his head down driving across the line with incredible power. Jay Black and Keegan Bartlett passed the ball around superbly and Owen Harrison made some excellent runs. Wardill accelerated again and offloaded at the last minute to release McGahey who supported fantastically to cross the line and score a great try.

Wardill broke free and went on his own to score another immense try. Hull Wyke never for one minute gave up though and continued to battle throughout the match. Harry Bulleyment scored his own fantastic try as he forced his way over after stealing the ball on the Wyke line and Sherwin made it an outstanding hat trick with a powerful sprint over the line.

Benstead was rewarded for his hard work throughout the match with a powerful try to finish the game 52 – 0. Hull Wyke started the match the strongest but Beverley turned it around for an emphatic win. Man of the match deservedly to James Sherwin who was outstanding. 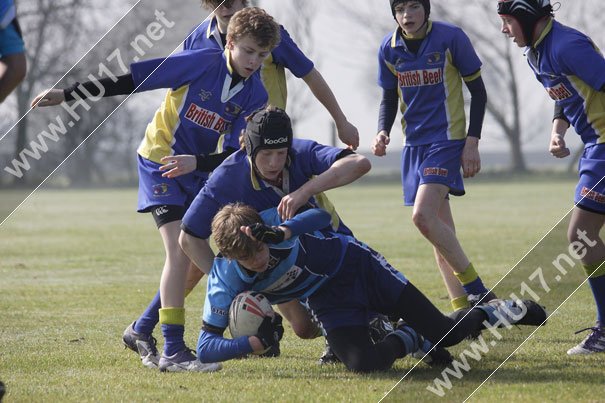