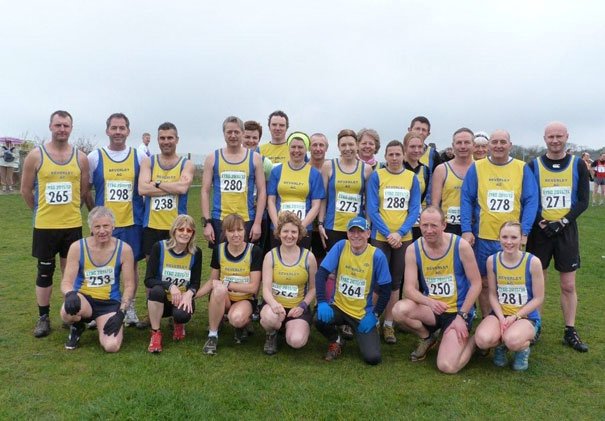 It was a soggy Sunday at Sewerby for the final race of the 2011 / 2012 season of the East Yorkshire XC League. The rain that fell before and during the race created slippery conditions underfoot and some parts of the course were very muddy.

117 hardy athletes from eight local running clubs set off from the cliff top at Sewerby and followed the testing course through Danes’ Dyke, round field edges and through woods at Flamborough and then back to Sewerby along the cliff top path.

Steve Ostler was the first Beverley runner home, finishing in an impressive 35:19 and in eleventh place overall. Still in his first year with the club, he ran the last three races in the league and looks a promising prospect for next season. He was followed by League veteran Jim McGivern, Stuart Little, Steve Evins and David Millson. The final runner scoring points for the men’s team was Andy Tate. After competing in the League for a number of years he was delighted to record a course best time at Sewerby and to score points for his team.

For the fourth race in succession Beverley’s Carla Stansfield won the ladies’ competition. She finished in twentieth position overall in a time of 36:18 and was the fourth Beverley runner to cross the line.

Sam Allen and Jayne Dale made up the rest of the ladies team, finishing in eighth and ninth positions respectively. Dale had an excellent run. She beat Julie Donald for the first time and finished three minutes faster than last year to record a new course best. Her training for the London Marathon is paying off and she has improved her times consistently in this season’s cross-country series.

Despite running the 16-mile Golden Fleece Circuit the day before, Pam Atkins was determined to complete all races in the XC League and finished in a commendable 54:16.

Jacqui Dickinson has just returned to running after a hamstring injury and although she was drenched by the rain she was glad to be racing again and finished with a big smile on her face.

The race was won by James Kraft of Scarborough in 31:52. The first lady to finish was Carla Stansfield of Beverley Athletic Club in 36:18.

With the final race over everybody took shelter from the rain in the Ship Inn while the results were computed.

It was no surprise that City of Hull finished first with Beverley second in the men’s and ladies’ competitions, mirroring team results in most of the races.

For the men the key race was Thixendale where City of Hull opened up a big lead which Beverley found impossible to close, despite their best efforts.

Matt Chadwick commented “We were a distant 2nd last year so we have improved and may stand a better chance next year if the better runners turn out more regularly.”

For Beverley ladies the key to success in second place was Carla Stansfield. The team finished fifth in the one race that Stansfield missed and came second in the other five races after she joined the club. She was rewarded with first prize in the individual awards.
There was an impressive haul of prizes for Beverley runners in the veteran categories with Beverley ladies dominating the awards.

Team competition:
2nd in both the men’s and ladies’ competitions behind City of Hull