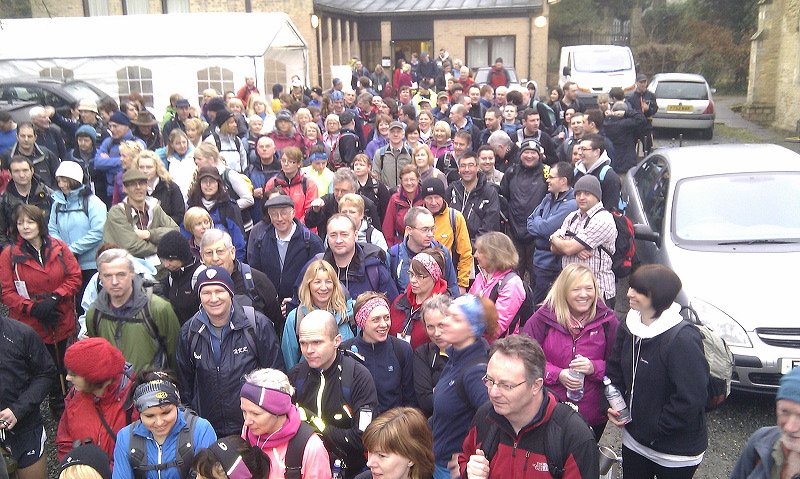 A new event was added to the long distance off-road calendar last weekend with the inaugural Golden Fleece Circuit. The challenge event was a huge success with more than 300 people taking part.

The Circuit was set up by South Cave Scout Group in memory of Bob Gunby who was chairman and an active member of South Cave Scouts for many years. The organisers benefitted from expert help and guidance from the East Yorkshire Long Distance Walkers Association and Scouts, Explorers, Beavers parents and the local Rotary club all helped out on the day.

Participants could choose to run or walk and there was a choice of 16 or 26.5 miles starting and finishing at South Cave. The undulating route was mainly off-road but on decent footpaths and took in a number of villages and valleys of the southern end of the East Yorkshire Wolds. After a dull and cloudy morning with a few light showers the later finishers were blessed with a beautifully sunny afternoon.

First to finish the long route were Rob Snaith of Beverley Athletic Club and his best mate and training partner, Chris Adams of City of Hull. They crossed the line together in an amazing 3 hours and 19 minutes after navigating their way round the course and visiting the 9 checkpoints. Both are training for the London Marathon and wanted to run the Golden Fleece as a reasonably hard training session to build stamina.

They worked as a team, pushing each other on. After the first mile they were about a minute ahead of their nearest rival but after six miles they were so far ahead that they could not see anyone behind them. They maintained their pace despite the hills and a headwind as they ran from Bishop Burton to Skidby.

The ascent at Mount Airy Farm was a challenge after 25 miles but as they descended towards South Cave afterwards, Snaith and Adams were encouraged to see that they had completed the marathon distance in 3 hours 10 minutes – a real achievement considering the route and checkpoint stops. With the finish in sight they increased their pace and crossed the line 23 minutes ahead of the next finisher, Jim Rogers of City of Hull.

Not to be outdone by the men, Beverley’s Lucy Stamford was the first lady to finish. She completed the course in 4:41. “I felt pretty good … even at 27 miles!” she said afterwards, noting that her GPS recorded 27.34 miles for the long route, slightly longer than advertised.

The extra distance did not bother Mike Atkins who is a very experienced off-road athlete. He thoroughly enjoyed the long route, particularly the sections which do not usually feature in other events and even though there were a few extra hills to contend with.

A Beverley runner was also first to finish the shorter route. Nick Riggs completed the 16 mile circuit in 1:48 and seven minutes ahead of his nearest rival.

Pam Atkins and Anne Nequest have completed many similar events and opted for a leisurely jog / walk round the shorter route taking full advantage of the tea, cake and other refreshments on offer at the checkpoints. Although the route covered familiar territory from other events it was not in the same order or direction so it still presented a challenge.

Competitors were full of praise for the organisation of the event and Claire Moverley, spokesman for South Cave Scouts, summed it up as “a fantastic day with fantastic people in memory of a fantastic man.”