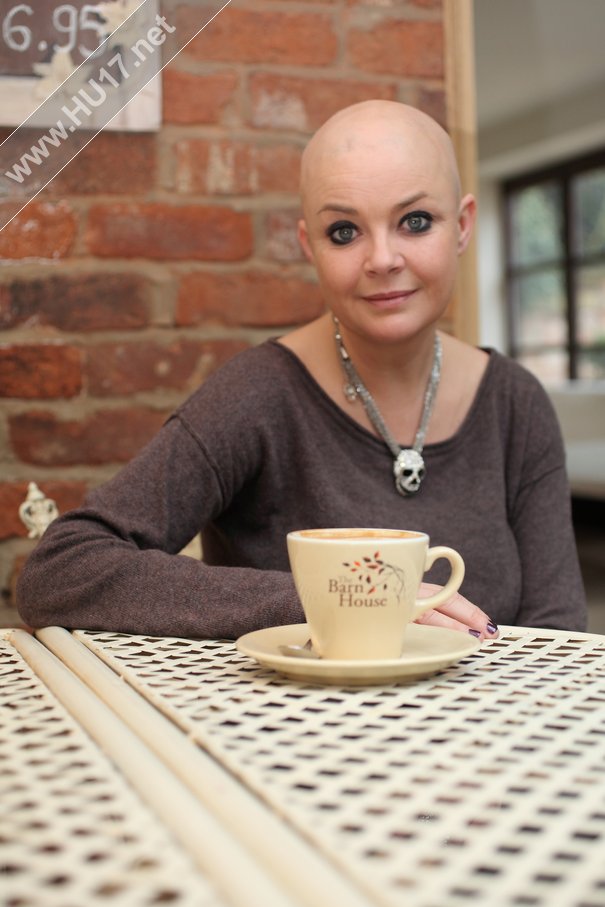 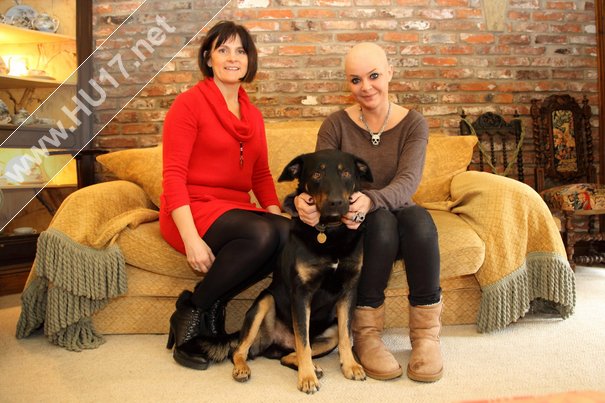 Gail Porter is famous for presenting numerous television programmes, having her bare bum splashed all over the Houses of Parliament and losing her hair to alopecia.

Last year Gail hit the headlines once more when she was detained under the Mental Health act for 17 days against her will. 2011 was a bad year for Gail Porter but 2012 sees a change of direction for her as she recently declared on her Twitter account “new year, new outlook” and what better way to start the year than a stay at East Yorkshire’s top luxury spa The Barn House for a weekend of pampering courtesy of The Garden Retreat.

“I have just had the most amazing deep tissue massage,” Gail says as we meet, “I feel so relaxed that I actually fell asleep on the table.” Being a mum, Gail always puts the needs of her daughter first so a weekend of pampering is a real treat.”

Gail is a long-term sufferer of insomnia and dreads the night-time as she finds it so hard to wind down.

“I never get a good night’s sleep, but I arrived here at the Barn House last night and as soon as my face hit the pillow, I was out like a light. I was supposed to wake up at 8.30 but didn’t get out of bed until 9:30. I couldn’t believe it. It’s such a beautiful place; I actually want to live here. I’m not joking.”

Having developed alopecia in 2005 one thing Gail misses is the mindless small-talk that comes with a hairdresser. “I had my nails done this morning and I really enjoyed chatting to the nail technician. Again, having my nails done is a luxury that I would normally go without but she did a wonderful job and I got to find out all of the gossip.”

Homeopathy is another treatment provided by The Garden Retreat and Gail was supplied with a remedy to help treat alopecia by the owner of the Barn House, Niki Clappison. After dropping the liquid onto her tongue Gail jokingly said “This is great, once I’ve necked this bottle, I’ll be going back home with an afro.”

Gail has got a fantastic sense of humour, she is quick witted, smart and not afraid to make fun of herself. She has developed a stand-up show and is currently touring the comedy circuit. “My stand-up routine is based on my life. The audience can start off a little freaked out when you’re stood in front of them making fun of yourself but they soon warm up and they’re laughing along with you.”

Since losing her hair Gail is constantly approached by people asking her if she’s okay.

“I feel like a bit of a fraud at times because I have people coming up to me in supermarkets crying and telling me I’m so brave, which is lovely and I’m a tactile person so I don’t mind when people come up to me and start hugging me… unless they smell. But, I am actually alright you know.”

“I’m not as fragile as people think I am.”

” The strangest question people ask her is “How is the hair growth coming along?”

“I get that all the time and I’m like, hello?” she points to her head, “I am completely bald. How do you think it’s coming along?” Generally though, I do get approached by the nicest people and it’s nice when they approach me to show me their bald patches or to tell me their stories and tell me that I have helped them cope. I find that really rewarding.”

“That is one of the reasons that I am so outspoken about personal issues because I know that by being outspoken it can raise awareness and help others to feel less self-conscious.”

When Gail’s career began she was presenting light hearted shows like Fully Loaded , Big Breakfast and Top of The Pops .

“I had a fantastic time presenting Big Breakfast , every day on that show was so different and so much fun. One minute I’d be chatting to Zig and Zag, the next I’d be interviewing someone in the bathroom.”

“My day would begin at 2am but I would finish work at 9am. Then we’d all pile into the pub at 10am. It’s a real shame that there’s nothing like that on television nowadays.” A career highlight for Gail was Top of the Pops , “It was such an iconic show to work on and so much fun. I would love to present a music show again but one with the energy of Top of the Pops. It was so youthful and vibrant, great to be a part of and also great fun to watch.”

In 2004 Gail began presenting cult paranormal show Dead Famous , where she scoured locations in search of the spirits of dead celebrities. “I was a complete sceptic when I started on that series but there were so many genuinely scary moments that my opinion soon changed. In fact if you asked my mum, she would have told you that working on that show was the reason my hair fell out, she’d say “well that’s what you get from messing with the dark arts”, nothing to do with stress.” she laughs.

Since then Gail has appeared on numerous shows as a panellist, regularly returning to The Wright Stuff , been the subject of a documentary Gail Porter: Laid Bare and she released an autobiography of the same name.

But out of all of the jobs she has had Gail would like to investigate more hard hitting documentaries as she did in Gail Porter on Prostitution . “It was a fantastic experience, desperately sad at times but an amazing opportunity to present different perspectives on a subject that’s so taboo. Amsterdam was a real eye opener. At one point, I actually stripped to my underwear and got in one of the windows. I felt like a piece of meat and when I got out I cried and cried.” she said and then jokingly added “…because nobody looked at me.”

“Most jobs in television at the moment are focused around “celebrity”, like do you want to dance on ice?”

“No, that would hurt or do you want to live in a house with a load of other “celebrities” I mean, is anyone watching Big Brother anymore? The thing with reality television is, it pays really well and it’s a job at the end of the day so you never know. But if I could choose then I would definitely do more documentaries.”

Gail certainly has enough personal experience under her belt to enable her to tackle hard hitting issues. “Did you know I was committed last year?” she asks.

Who doesn’t know?  The story was splashed all over the tabloids after Gail admitted on a live radio show that she had been detained under the Mental Health Act against her will.

“I’d had an argument with my boyfriend and I was kicking off and things got a bit out of hand. The police turned up, I’m Scottish and I’m fiery tempered so the Police, took one look and think ‘right’ and lock me up for 11 hours and all the while I’m in this cell, I’m getting more and more wound up because nobody is talking to me to tell me what’s going on.”

“Whilst I’m in there, my ex-boyfriend goes and gets two signatures from medical professionals to say I’ve got mental health issues and then signs it himself as my next of kin and before you know it I’m carted off to a mental institution. Honestly, it’s so easy to get someone committed. I could get you committed now if you want?” she laughs.

“I can laugh about it now, but I certainly wasn’t laughing at the time. The conditions were absolutely dreadful. I was locked up in this building with people who had very serious issues.”

“I’d be sat eating my lunch and a woman would be sat opposite screaming Bald c**t at me, and I’m like, how does she know? Oh! She means me!”

Gail was detained for 17 days in total but in that time it took a whole 11 days to receive any diagnosis from a medical professional.

“As soon as he saw me he said, ‘There’s nothing wrong with you,’ you’re just a bit sad.’ and I was, I’d lost my mum and four friends in a short space of time, of course I was sad. Who wouldn’t be?” As awful as the experience was Gail is full of stories about the place and is currently in the process of writing her second book.”

“It’s based partly on real life, a bit like Girl Interrupted and One Flew Over the Cuckoo’s Nest.” She says. The experience has also played a part in Gail’s new involvement with the charity MIND where she is working alongside Stephen Fry and Adam Ant on various projects to raise awareness on mental health issues.

So what next for Gail Porter, “Well, I qualified as a Zumba instructor yesterday so I’m going to start running Zumba classes very soon, in fact I love it here at The Barn House so much, I might ask if I can hold classes here in their beautiful gardens. I also need to get my book finished which I am really excited about and of course continue with my live music and comedy nights. ”

“As well as my stand up show, I compere a regular comedy night which is great because you get to see new, up and coming acts.” Gail’s favourite comedians include Eddie Izzard, Billy Connolly and Noel Fielding. ”

“I absolutely love Noel Fielding. In fact, I want to marry Noel Fielding.” She says. But Gail’s immediate future consists of sleep “Honestly, I feel so comfortable here at the Barn House. I’ve been made to feel really at home and after all of the relaxing treatments I’ve had, I’m looking forward to another good night’s sleep and for an insomniac like me, that’s a really special treat.”

For more information on The Barn House and Garden Retreat, please visit www.barnhousewalkington.co.uk/garden-retreat/