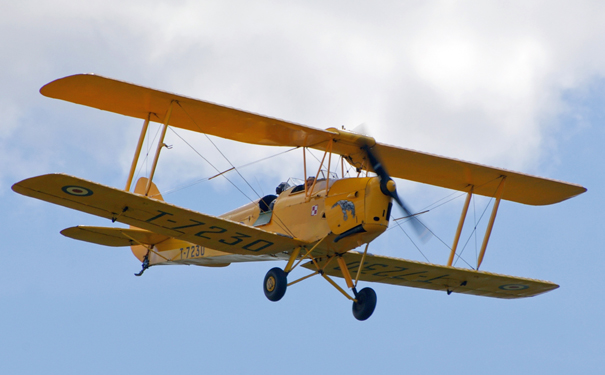 Beverley’s Armed Forces Day chairman councillor David Elvidge believes the planned fly-by from one of the RAF’s most unsung planes of WWII will provide a “poignant” but thrilling highpoint to the day.

Councillor Elvidge has confirmed that, weather permitting, a Tiger Moth will fly over Beverley’s day of tribute to our servicemen and women on Sunday 3 July.

Last year’s planned fly-by by a Spitfire failed to happen because of poor weather conditions, but this failed to dampen the enthusiasm of councillor Elvidge for bringing another veteran of WWII to the town.

He told HU17.net: “I am thrilled to be able to bring a Tiger Moth flypast to our Armed Forces Day.

“The Tiger Moth is probably one of the world’s most famous training aircraft, and during World War Two it provided the majority of RAF pilots with their elementary flying training, which adds to the poignancy of its planned visit to Beverley.

“Subject to the weather being good it will be one of the highlights of what promises to be another enjoyable and exciting day.”

The de Havilland DH 82 Tiger Moth is a 1930s biplane designed by Geoffrey de Havilland and was operated by the Royal Air Force and others as a primary trainer before, during and after WWII.

It remained in service with the RAF until 1952 when many of the surplus aircraft entered civil operation.

Many other nations used the Tiger Moth in both military and civil applications, and it remains in use as a recreational aircraft.

More than 7,000 Tiger Moths were built in the UK, with more than 4,000 being used during WWII as training for the fighter aircraft such as the Spitfire, Hurricane and Bristol Beaufighter.

The Tiger Moth being used for the third Armed Forces Day is sponsored by I Love The 80s.

News of the Tiger Moth fly-by is another shot in the arm for the day following news that the Ceremonial Events and Commemorations Team at the MOD has granted Beverley Armed Forces Day £4,000.

It’s less than half the amount granted for the first event in 2009, but councillor Elvidge is delighted that, in a time of deep cuts, such a substantial amount has been pledged.

He continued: “As chairman of Beverley Armed Forces Day I am once again grateful to the MOD for supporting our event.

“However these are difficult times and due to cuts across the MOD it is understandable that the grant this year is less then half of what the event received in the previous two years.

“I am once again, therefore, appealing for support from local businesses who may be able to sponsor our event and ensure its sustainability as a free community-based event where we can join together to show in a respectable yet enjoyable way our support for this countries Armed Forces, past, present and future.”