With Britain in the grip of winter and numerous sporting events cancelled because of heavy snow, Beverley Athletic Club’s Tony Hunter flew off to Spain to spend the weekend running in Benidorm.  He made the most of his time there by taking part in a half and full marathon which were held on consecutive days.

More than 2000 runners lined up for the half-marathon at six o’clock on Saturday evening but conditions were far from perfect.  It was dark and cold with torrential rain.  Hunter’s plan was to run both races at the same even pace and slightly slower than usual but the weather was so bad that he increased his speed towards the end of the half just to get out of the rain!  He crossed the line in 1.31.50 and finished 8th out of 99 in his age category and in 322nd place overall.

With only thirteen hours between finishing the half-marathon on Saturday evening and lining up for the start of the full marathon at 8.30 on Sunday morning, Hunter enjoyed a good night’s rest before embarking on his second race of the weekend.

Conditions were much better for the marathon – dry and mild.  Hunter managed to stick to his planned pace for the first 20 miles and was on schedule to finish in under 3 hours 10 but his efforts in the half-marathon had taken their toll and he was forced to slow down in the last few miles.  Despite this he finished in 3 hours and 16 minutes in 61st position overall and second in his age category (55 – 59).

Reviewing the races afterwards, Hunter commented “I went a bit too fast in the half and a bit too slow when I was completely exhausted towards the end of the full marathon.”   All things considered he finished in very respectable times in both races.

There were 311 finishers in the marathon which was won by Elhoussine Essemaali of Morocco in 2.25.54.  The first lady was Marit Ärthun from Germany in 3.03.20.

Photo of Tony Hunter at Thirsk in 2009 by Beverley Athletic Club, Reported by Kay Farrow 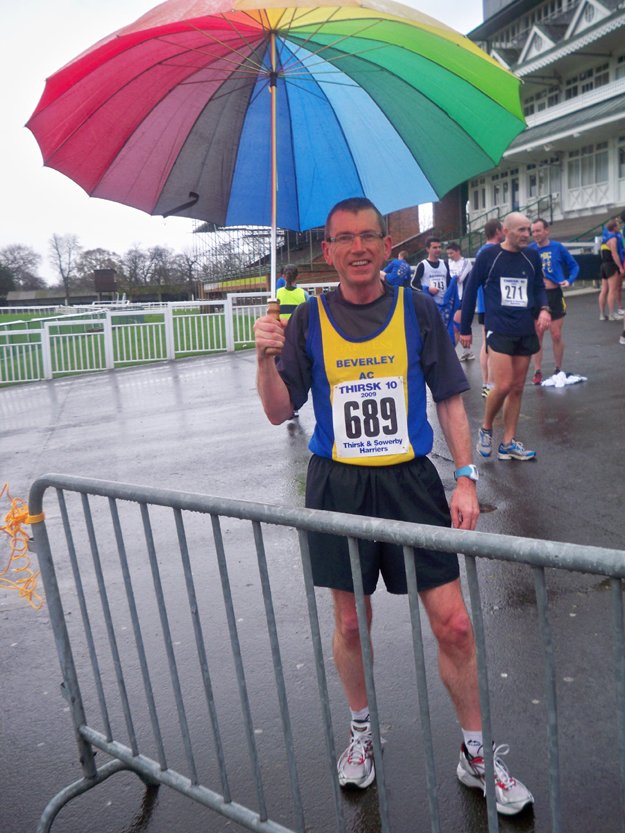